Pardon me for taking a few days off from blogging; I guess I needed it! Here are the pizza photos I promised you on the last day of VeganMoFo: 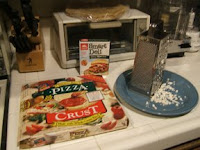 In this photo, you see the box of pizza crust, Lightlife Baked Ham Style veggie lunch meat, and the grater full of Follow Your Heart mozzarella. On top of the toaster oven are the pizza crusts themselves. 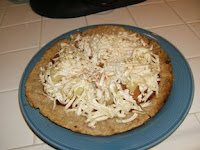 This photo is of the finished product: Vegan Hawaiian Pizza!


In other news, the prosciutto was next to the baked tofu again at Trader Joe's. Ugh. So, I went to the little management desk and let them know that wasn't cool in the nicest way possible. I also had to ask them where the heck my fat-free original flavor WestSoy soy milk was. Apparently, it hasn't been discontinued, so that's good. Remind me not to go to Trader Joe's on a Sunday again, ok? I'm hoping that was the problem as opposed to them not carrying it anymore.

I went to a family gathering on Sunday, for which my dad's cousin was kind enough to call me ahead of time to ask me what I could eat. What I've come to realize is that it's far easier to let people know what I don't eat because there's so much that I do eat. She was so sweet to go to Follow Your Heart to buy vegan mozzarella (she actually put this out like a cheese plate and it was actually good eaten plain in cubes) and vegan parm for the Italian meal she created. There was a huge spread of veggies and hummus, bruschetta, and the aforementioned FYH cheese (plus omni cheese) for the pre-meal munchies. The main vegan dish was pasta with veggie sauce and she also bought FYH vegan caesar dressing for the salad. Yum! I missed out on dessert because none of the options were vegan and she'd declined when I offered to bring a dish, so I didn't bring a vegan dessert to share. That didn't bother me one bit, though, as I happily munched on grapes for dessert!
Posted by Jenni (aka Vegyogini) at 8:59 PM

How sweet and thoughtful of your dad's cousin to get all of that vegan grub for you. I bet it was lots of fun!

mmm, that Vegan Hawaiian Pizza looks even BETTER than it sounded, in your previous post - yum!!

I can't stand the Trader Joe's near me - not only do they pile bacon packages ON TOP of tofu packages (no joke), but the people working there are not very knowledgeable (friendly? yes - but it's important to know what the store you're working in is selling!), and the shelves are always chaotically disorganized. So you have my full sympathy over the chaos at YOUR TJ's :0)

So glad to hear that you were able to enjoy your Sunday family gathering - and hey, grapes are fine for dessert too! :0D

they keep the tempeh burgers next to the roast chickens at my local store! I keep meaning to talk to the management about it, so I'm glad you did (it's inspiring), I'll talk to them the next time I'm in. It's so gross. ;_;

And that pizza looks amazing, I'd totally forgotten about hawaiian pizza!

I think most of us have needed a few days off from blogging after all of that vegan mofo craziness! Your pizza sounds delish and how cool of the hostess to accomodate you so well!
Good for you talking to trader joe's about the placement of their animal products. Sometimes I just want to ask whole foods to move their whole fish dept...it makes the produce section smell!! But what you asked is a bit more reasonable...

That's so sweet of your cousin :o).

And I'm really sorry about your soymilk being discontinued. I know how awful it is to have a favorite product discontinued, and one of my worst fears is that they'll discontinue MY favorte soymilk-- Vitasoy light original enriched (if you're in the market for a new favorite, I highly recommend this one!). There need to be more vegans in the world simply so there'll be more people to buy all the vegan products so that they won't get discontinued so often!!!

The pizza was good. I just think I would've preferred it w/out the pineapple. I love pineapple, just not so crazy about something sweet on my pizza. I gave it another shot, though! I don't know how the prosciutto ended up there AGAIN after they'd so kindly moved it for me once before. The soy milk apparently hasn't been discontinued, just briefly is unavailable. Good thing I still have another carton or two on hand. I just prefer the non-fat stuff, you know? Oh, and VeganNoodle, I'm SO with you on the nasty fish section at Whole Foods. Eew! I have to hold my breath and avert my eyes every time I walk past it! So gross!