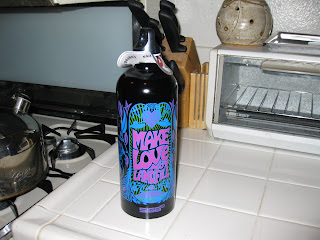 I'm extremely fortunate to have a select few people in my life who know exactly what will bring a smile to my face and who just happen to have perfect timing. After a long, difficult week, I got home tonight at 11 p.m. to find a brown box on my doorstep. Knowing that I hadn't ordered anything, I wondered what the heck was in it and who sent it. Since there was only one way to solve the mystery, I opened the box and found inside the most fabulous Sigg bottle. "Make Love Not Landfill" is the message written in fuchsia on a black bottle with a groovy blue, green, and purple design. It's like my favorite 60s protest song, but in reusable bottle form.

The only evidence linking my beautiful new treasure to its sender was the packing slip and guess whose name was on it...that's right, ma meilleure amie. You see, we often have long, drawn out conversations via text since we live on opposite sides of the country and, last week, I told her how I'd love to have a Sigg bottle to refill. She looked them up and then realized that she'd bought one for her older son while recently on a trip to Switzerland (where she spent much of her childhood). Of course, she was thrilled to learn that these eco-friendly bottles are Swiss-made, too. Little did I know that, about a week later, I would have in my possession a Sigg bottle that seems custom-made for me. And to think that, just this morning, we were talking about how it's the little things in life that matter most.

That is so cute!

so cool.
We just recently bought 2 bottles.
One for my husband and one for moi.
We love them.

I have that same water bottle and I love it! Good for you for saying byebye to plastic :) The earth thanks you...as well as your body!!