Consider me jealous. Many of my fellow vegan bloggers have been the lucky recipients of oodles of free vegan food recently. So far, I've counted 4 who have received a plethora of free vegan products (faux cheese and hummus, I believe) from Galaxy Foods: Get Sconed!, A Veg*n For Dinner, Melomeals, and Eden in the Kitchen. Then, there are the 2 who were gifted with Lightlife products: Eat Air (who got a similar package last year, as many, many others did) and Melomeals. (Don't even get me started on the many fortunate people who got Wheeler's Black Label ice cream!) Mind you, those are only the ones who've blogged about their free goodies (so far) and I might have even missed some, so there might be a lot more people who got such packages. Please don't think I begrudge any of these wonderful bloggers their bounty. On the contrary, I'm quite pleased that vegan companies (or, should I say, companies that make vegan products) are seeking out vegan bloggers to test their products. I see that as a win-win situation because maybe the companies will take the bloggers' critique to heart and produce even better vegan products. However, I feel left out and would love to be part of the game. Just like elementary school. Ok, maybe I didn't always want to be part of the game back then.

Way back in February, though, the Veggie Queen, Jill Nussinow, offered to send me a copy of her cookbook, The Veggie Queen:
Vegetables Get the Royal Treatment. Of course, I eagerly accepted her generous offer and was very excited to be singled out by her. Since I generally read cookbooks cover-to-cover like novels, it took me until late March to find time to read it.

Jill has an earth mother quality that comes through in her writing and thoroughly expresses her love of veggies. I definitely learned about some varieties of veggies that were new to me. I'm not sure that I'd be able to find a lot of those same varieties at my local Farmers' Market, but probably at the larger Los Angeles-area Farmers' Markets. I found a few typos, which I've learned is not uncommon in cookbooks (much to this natural-born editor's chagrin). The only one that was a big deal was on page 6 in the Roasted Potato, Mushroom and Asparagus Salad, which gives instructions for beets, but doesn't list them in the ingredients list and omits any instructions for the potatoes. When I mentioned that to her, she sent me the recipe and indicated that this is only an issue with the second printing of the book.

She mentioned Beano in the book, which gave me pause since Beano is not a vegetarian product, but then I realized that this is not a vegetarian cookbook; it's a vegetable cookbook and there is a difference. She did a very nice job explaining legumes and gave great tips on preparing them. I had no idea that there were certain ones that fell into an "heirloom" category. Until I read this book, I'd only heard of certain tomatoes being referred to as heirloom. (I'm assuming that those of you who garden knew this, but I am not a gardener.)

The pressure cooking section was also really good. I don't have a pressure cooker and I found her tips on how to choose one and which she's prefer to be very good. She even stated which brands and sizes were best. 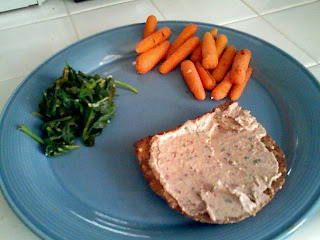 I've made 2 recipes so far: Wilted Lemon Spinach and Carrots with Honey, Lime, and Dill (I made mine with agave nectar and left out the dill, which is not my favorite herb). They were both very good ways to showcase their respective veggies. Sometimes simple preparation is best and I enjoyed both these recipes.

Receiving this book was a huge treat for me. I absolutely LOVE getting packages and mail, so I was very excited when this book arrived for me. Thank you again, Jill, and I'm looking forward to trying more of your recipes!

Oh, in the photograph, you'll see a spread on my toast. It's the Chipotle Lime Two-Bean Hummus from ED&BV and it's really good! I've enjoyed it on toast and as a dip for raw baby carrots. I was expecting it to be far smokier and spicier since the word "chipotle" is in the title, but it only calls for a small amount of chipotle hot sauce. In fact, this hummus is a bit on the sweet side, if you ask me. Next time, maybe I'll use a chipotle in adobo sauce, as well.
Posted by Jenni (aka Vegyogini) at 8:53 PM

neighbor, invite yourself over :P

next time I make cupcakes I will def. give you a note... because i should not eat all 12 by myself!

Hey, I want free stuff, too!
I know what you mean about being all excited about getting packages in the mail...it seems even more special now that so much of our lives are spent "virtually" on line :)

Oooooh a veggie cookbook. I wish I got free stuff as well, oh well......

thanks for the link!!

I haven't tried that hummus yet, but I absolutely LOVE "ED&BV." Dreena is one of my favorite authors, and that book is amazing!

And getting packages in the mail really IS the best! :)

Oh, who wants Wheeler's Vegan Ice Cream anyway? ... Oh wait, I do too!

Until then, how nice to get a cookbook in the mail! The recipes all sound excellent.

I want free stuff too! *stamps foot and crosses arms*

Oh well, I guess I'll just have to settle for buying whatever I can get my hands on when those more famous bloggers review it! :)