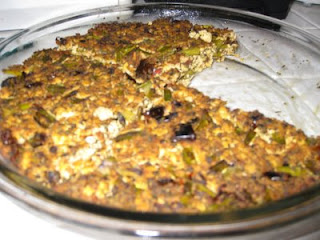 For VeganMoFo, I've set a personal goal to prepare more recipes from my cookbooks. It's not often that I get home from work on a weekday in enough time to actually prepare a meal, which means that I read my cookbooks far more than I use them. I'm doing my very best to rectify that situation.

Wednesday night, I ate dinner and then set to work on this frittata, a recipe I'd never made before from Vegan with a Vengeance. Despite my multiple accidental attempts to ruin this dish, it turned out beautifully!

I'll start with the mistakes I made: I completely missed the step to add the soy sauce, mustard, and nutritional yeast to the tofu until after I'd added the veggies to the tofu. While it would've been nice for those flavors to have melded with the tofu ahead of time, I don't think it affected the taste at all. Then, I forgot to set the timer when I put the frittata in the oven. Luckily, I realized my timer error quickly and only left it in the oven a few minutes longer than the recipes states.

I made a couple substitutions, as well. Obviously, I omitted the onion. I used dry sun-dried tomatoes instead of oil-packed (significantly decreasing the amount of fat in the frittata) and increased the amount by maybe double. My asparagus was thin and I used about 6-8 ounces of it instead of the 3 stalks indicated in the ingredients list. Sadly, I didn't have any fresh basil, so I used 2 tablespoons of dried.

Awesome first tofu scramble! It looks so chunky and perfect!

Hey 'sis! (He he...) That Frittata looks so good. I too have yet to make it, though I often curs myself for not having asparagus or tofu in the house - I nearly never have tofu on hand... I really do want to try this, and it's good to know that it's such a forgiving dish!

I love when recipes turn out almost in spite of me. Looks great!