Cornbread and a Vegan Athlete 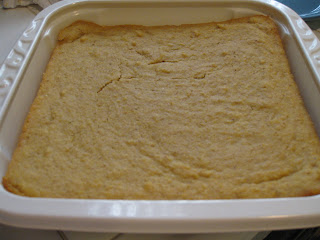 While I'm not a cornbread connoisseur, I do know that this Happy Herbivore test cornbread is the most flavorful, moist, and healthful cornbread recipe I've ever tried.

In other news, John Salley, of NBA fame, appeared on an episode of Rachael Ray's daytime talk show last week. He openly discussed his VEGANISM (edited clip here), explaining that he "decided not to die at a young age because I love my life" and became vegetarian in 1991 when he was diagnosed with high cholesterol. Unfortunately, the clip doesn't show the part when he talked about going vegan, so I can't recall exactly how long he has been vegan. When asked where he gets his protein, his answer is: "You get your protein the same place animals get it from; green leafy vegetables." On top of touting veganism on national TV, he was hawking his own line of foods, which are organic, vegan, and kosher. Way to go, John Salley!

Oh, I also have to mention that Rachael's cooking segment that came later in the show was for a chicken club quesadilla, but she was so rattled by having a vegan on the show that she constantly reiterated the fact that any animal product in the dish was easily replaced with a vegan or vegetarian alternative. :)

For some reason, I've been craving cornbread lately, and I think this post has elevated it from a craving to a "must have". I'm not much of a cornbread eater, but it just sounds perfect for the season.

That's awesome that Rachael Ray had him on her show. Its always a nice thing when cooking shows feature all types of foods and diets. I'm really glad to see more and more celebrities embracing a vegan lifestyle!

I really love cornbread! It's not common at all theren in Germany, but I make it all the time.

there's nothing I love more than when veganism gets some mainstream attention, especially when its from someone who doesn't fit the vegan stereotype. thanks for the link to that clip!

All these tester recipes are killing me! Hooray for John Salley. I think his response to where he gets his protein was right on. Rachel Ray is so stupid. How difficult would it have been for her to have a vegan (or even a vegetarian) meal on her show for that day.

That's so funny about Rachael Ray! I haven't heard of John Salley, but it sounds like it was a great show. And the cornbread does look delish! Looking forward to that book :)

that is such a funny segment. i wish i would've caught it. i love seeing rachael ray squirm haha

lol! thats funny about Rachael Ray.. nice! She should do a vegan thing soon:]

I just made some cornbread! Yum! I love when Vegan athletes make it to the main stream media - helps wee little vegan athletes feel better about it all!

I need to try her cornbread. I love Lindsays recipes. I tape Rachel's show sometimes and now I need to go check and see if I have this one. I have not been watching tv much.

congrats on making it through Vegan MoFo!!!! WAy to go!!!!