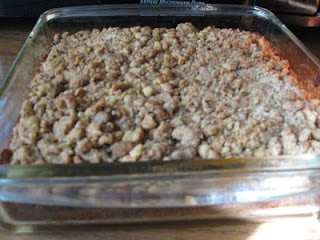 My maternal grandpa passed away early last Friday morning; a week ago today. My mom didn't call to tell me until I was walking out the door on my way to work at 7:30 a.m. because she wanted someone in the family to have had some sleep that night. She didn't want me to go to her house until 11, which left me with a significant amount of time on my hands. I did the only thing I could think to do: I baked. Of the two baked goods I prepared that morning, one was the Quinoa Coffee Cake from The Gluten-Free Vegan. I wanted to make sure my mom had something to eat and I had everything on hand for it (ok, you caught me; I didn't have sour cream, so I substituted an equal amount of Wildwood plain yogurt).

This was my first time using quinoa flour and I was surprised that it has a very distinct flavor. It's difficult to describe, as it's almost bitter, but not quite. I tasted it and decided that I wouldn't use it as a main flour again. However, I found myself continuing to sample the coffee cake over the four days it lasted and I really enjoyed it. I have a feeling that's more the fact that my taste buds are able to appreciate flavors that omnis might not, so I'm thinking this is probably not the best recipe to make for people who would expect very traditional coffee cake.

I will definitely make this again, though. The texture was soft and a bit crumbly, tasting strongly of the quinoa flour, but in a pleasant way. I thought the crumble topping was just perfect with both the cinnamon and the walnuts shining equally. Also, the coffee cake wasn't terribly sweet, which I appreciate in a baked good.

Tomorrow, I'll highlight the non-gluten-free baked good I prepared that morning. Until then, GF gets the spotlight!

Luckily, I had written and stockpiled multiple blog posts and have still not missed a day of VeganMoFo, but my grandpa's passing is the reason I haven't been commenting as much on your blogs. I'm still trying to catch up!

aww *hug* I'm so sory that you rgrandpa passed away, mine passed away this year too.
Quinoa.. hmm I've never tried baking with it but the coffee cake looks yummy!

i'm so sorry about your grandpa! my thoughts are with ya and your fam. :(

the cake looks like a great way to spend the morning though. very delicious-looking.

I'm the same way--baking always helps make me feel better! So sorry about your grandpa.

I've also tried quinoa flour and didn't like the taste very much (which is weird, since I love actual quinoa grain). But I'd always mix it with something else if I ever bake with it again!

So sorry to hear about your grandpa. I'm glad you had some baking ingredients on hand to help comfort you... there's nothing like yummy homemade food to help make you feel better even when life is shit!

Baking is one of those things that makes everything feel better. I think it's the fact that you created something good when things were bad (at least that's how I see it). I hope you are coping all right.

The coffee cake looks delicious. I haven't tried quinoa flour before. I usually try a new flour each week. I'm gonna pick some up just for fun.

Please don't worry about not commenting on others' blogs; we all understand!

I'm sending you lots of hugs. I was a wreck when both my grandpas died.

I'm very sorry to learn of your grandpa's passing. Big hugs for you.

You were sweet to bake for your mom. I have The Gluten Free Vegan and I think I'll try this recipe. I really like quinoa flakes. I may try them in this recipe.

My condolences.
Your fellow vegan bloggers are here for you.

Many condolences on your Grandpa's passing.:(