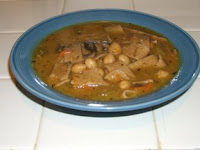 We interrupt the regularly-scheduled Veganomicon Jelly Donut Cupcake review for this emergency Veganomicon Chickpea-Noodle Soup review. Like many of you, I have allergies. They generally kick in when the barometric pressure changes drastically and/or when the Santa Ana winds are in action. Well, here in L.A., we've been enjoying 85 degree days when, just a week ago, it was cold outside (ok, it was only cold for a few days). My point is that I started to feel a tiny twinge of my allergies last night and then again beginning late this afternoon. I quickly downed some Emergen-C and realized that dinner tonight really needed to be soup. I was going to make Cindy O's "Chicken" and Rice Soup for the Soul from La Dolce Vegan, which was very comforting when I had a bad cold in March (since going vegan, I pretty much only get sick once every 2 years or so and it never lasts as long as it would in a non-veg). Then, I remembered that, among the generous sampling of Veganomicon recipes on the PPK site, there was a recipe for Chickpea-Noodle Soup (I didn't have the book with me and I wanted to see what the recipe entailed). I looked up the recipe and, lo and behold, I had all the ingredients! I only made a few substitutions: 5 stalks of celery, chopped, in place of the onion, pre-packaged grated carrot, 3 cloves of garlic instead of 2 (I have pre-peeled garlic from Trader Joe's and the cloves are vacuum-sealed in sets of 3 cloves), Organic mellow white miso, and 8 ounces of Trader Joe's Organic Sprouted Wheat Pappardelle (I didn't have any soba and I thought the fat pappardelle noodles would be nice, plus Isa and Terry warn against using soba in this soup if you're not going to eat it all at once). I meant to add spinach, but I forgot. I was worried that it would be too garlicky with the 3 cloves, but I really can't even taste the garlic. Oh, I used Trader Joe's Organic Vegetable Broth. Anyway, as if it weren't already evident from this enthusiastic entry, I LOVE this soup! Seriously, I can't wait to eat it again for lunch tomorrow. I'm pretty sure that it'll be far less soupy tomorrow, though, because the noodles already appear to be soaking up the broth as it cools on the stove. I really don't care because it's just that good.
Posted by Jenni (aka Vegyogini) at 8:30 PM

What a yummy way to combat those allergies ;o).

This Chickpea-Noodle Soup definitely does sound like a winning recipe - glad that you liked it! And that it's helping to tame your allergies (in a delicious way, of course!)

This was one of my best allergy-fighting ideas yet!