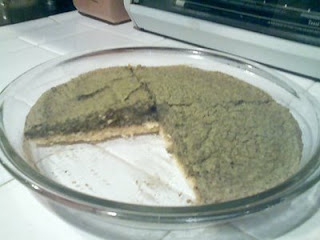 All I'm allowed to tell you about this delicious Happy Herbivore test recipe is that I really enjoyed it!
Posted by Jenni (aka Vegyogini) at 10:13 PM 3 comments:

Liz Lovely Lives Up to Its Name

This week, the generous Andy of Liz Lovely sent me samples of two of their cookies (the photo above is from their site). My intention was to wait to sample them until my allergies had passed, since I read a few months ago that the consumption of wheat and sugar exacerbates the severity of the allergies while they're active. However, this has been an exhausting week and I thought it would be nice to eat a cookie. Hey, at least I'm honest.

Have I mentioned that I absolutely love crystallized/uncrystallized/candied ginger? Ginger as a sweet is basically my favorite "candy." I know, I know, I'm weird because I'd rather have (un)crystallized ginger than chocolate. Believe me, I've been accused of worse. I promise you that this little piece of information about me is relevant to the cookie.

The description of the Ginger Snapdragon from Liz Lovely's site says: "Intense organic spices, sweet and sharp organic candied ginger, and a deep undertone of blackstrap molasses all working together." In other words, this cookie was simply made for me! The ginger is the star here. I found myself licking gingery sugar off my fingers and hunting for any crumbs that fell while I was eating. What's even better is that this spicy, flavorful Liz Lovely cookie was hands-down the softest non-homemade cookie I've ever had. Not only was the Ginger Snapdragon soft, but it also lacked that incredibly dense quality that a lot of store-bought vegan cookies have (I won't name names, but I'm sure you know which brand(s) I mean). This is a cookie that anyone, omni or vegan, would love. See? I told you Liz Lovely lives up to its name!
Posted by Jenni (aka Vegyogini) at 9:08 PM 11 comments:

A few professional athletes are ahead of the curve regarding their nutrition. The following ESPN.com article highlights 4 professional athletes who have adopted vegetarian and/or vegan lifestyles. Here's hoping that they'll have a positive influence on their colleagues and fans.
Posted by Jenni (aka Vegyogini) at 9:57 PM 4 comments: 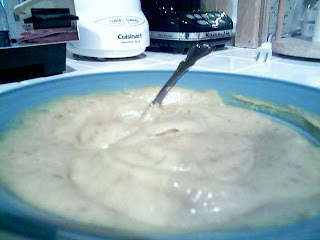 Believe it or not, the dish that is the subject of this heinous photo is an incredibly delicious Happy Herbivore creation. It's a tester recipe, so I can't give you a recipe, as usual. I probably shouldn't have posted the picture, considering the awful quality, but I wanted to make sure you knew I was still alive and cooking!

I also tried a homophone of this post's title: Teese. I've been shredding it to make quesadillas and I also sliced it to make a grilled cheese sandwich. Teese does melt as the claims state, but you need to really watch it carefully. For the grilled cheese, the Teese didn't melt before my bread turned very dark, so I had to remove it from the heat and press until it melted a bit more. It basically softened for the sandwich, although it did soften very well. I attempted broiling the first quesadilla, but found that the tortilla darkened way before the Teese melted, so I stuck it in the microwave for 45 seconds. That yielded molten liquid Teese. I set it aside for a couple minutes and it solidified again. The second quesadilla attempt went straight into the microwave for 45 seconds and that wasn't enough. Another 15 seconds yielded better results and I set it aside to solidify again. Teese is an interesting creation with its zero to molten liquid rate being difficult to pinpoint. I'm sure you'd like to know how it tastes, though. It tastes good, creamy, and mild. Oddly, it smells more strongly like cheese than it tastes. However, overall, it's a good product. I wouldn't shell out the money to buy it online again, especially with Follow Your Heart being in my backyard, but I'm happy to have tried it and I liked it. By the way, when linking to Follow Your Heart just now, I realized that they've dramatically changed their website, so I need to check it out!

Thank you for all your sympathy regarding my missing camera. I'm still hoping that it'll turn up!
Posted by Jenni (aka Vegyogini) at 8:01 PM 9 comments:

I promised you a NYC post and it is forthcoming. Luckily, I uploaded the photos before my brand-new camera went missing. :( Yes, you read that correctly. The last time I saw my beloved camera was two Saturdays ago when I was on the cooking and baking spree evidenced in the last two posts. Since then, my camera has disappeared. I've looked high and low, I've moved the couches, I've searched the car four times, and I will be cleaning out my closet just in case it's hiding somewhere in there. Until or unless I find it, I don't see any photo-filled posts (with the exception of the NYC post) in my future. I'll be posting, just not with any new photos.

Secondly, my days, nights, and weekends have been extremely full these days, which is why you haven't seen many comments from me on your blogs. As I type, I have well over 535 entries to read on my Google Reader. Rest assured that I will get to all of them, as reading your entries is very important to me; I just wanted you to know why I haven't been commenting lately. 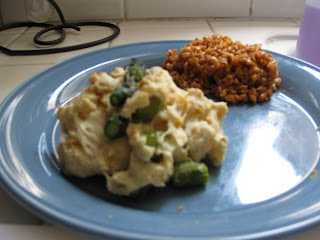 In the background, you'll see a tasty BBQ test recipe from Happy Herbivore. Run out and buy her cookbook as soon as it's available! Ok, I realize that you won't be able to get your hands on it until later this year, but it's going to be worth the wait.

In the foreground is a Vegetarian Times recipe for Asparagus Scones that I veganized. You may recall that I was the lucky recipient of two vegan cheeses from Galaxy Foods. I still had the block of cheddar unopened in my fridge and I had a bunch of asparagus that needed to be used. I'd had my eye on this recipe for a while and I finally got to it.

As I said, I veganized the recipe, so my version used vegan cheddar, Earth Balance, fat-free soy milk, and I went for spelt flour (per Dreena Burton's Vive Le Vegan, I added an extra 6 Tbsp of spelt flour) instead of the all-purpose. Another blogger (I apologize for not remembering exactly who) once posted a tip for recipes that call for cutting Earth Balance into flour: freeze the EB and grate it into the flour instead. I used that trick for these scones. My dough was extremely sticky and I had a very hard time getting the asparagus well incorporated, so I opted to make these drop scones (they're more like biscuits, really) as opposed to shaped scones.

The scones actually managed to bring some flavor out of the cheddar, which basically had no taste on its own. They also had some good spice due to the cayenne and black pepper. I think these would be good for a brunch party. They are very good and I think roasted broccoli would be a good substitute for the asparagus when it's not asparagus season.

I also made Happy Herbivore's Fiery Brussels Sprouts on Saturday and took them to the Angels game on Sunday for lunch along with a couple of those Asparagus Scones. For the Brussels sprouts, I made a few modifications: roasted the sprouts instead of steaming them, substituted maple syrup for the sugar and water, and omitted the garlic (mine is vacuum packed in pouches of three cloves and I didn't want to open a pouch for just one clove). They were incredibly delicious (as if there was any doubt)!
Posted by Jenni (aka Vegyogini) at 10:28 PM 9 comments: