Do you ever see ghosts?  I believe in spirit(s), but that’s not exactly what I mean in this moment.  A couple weeks ago, I visited Santa Barbara.  I drove up from LA, past my hometown of Agoura Hills, through the Camarillo grade, past the street after which my first preschool was named.  I made my way through cities and reached the stretch where the ocean was my copilot for many miles until the freeway narrowed and I reached the beautiful, coastal city where I spent 3 of my 4 university years at UCSB.  (I spent my junior year living abroad in Toulouse, France.)  I was so blessed to go to school there.  And, what’s even better is I got to go with some of my dear friends from growing up, as well as about 40 other friends and acquaintances from my high school graduating class.  Two of those beautiful beings passed away when they were still very young (27 and 31), but they are also not the ghosts I mean.  It was important that I got to go to UCSB with so many of my high school classmates because I was shy and having them there meant I wasn’t alone at the beginning.  New friends showed up in my life quickly, within the first few days, and by the first weekend, I was so enamored with my independence that the draw of the 80-mile drive home no longer existed.

My friends and I spent a lot of time on State Street when we were at UCSB.  Before we were allowed into bars, we’d drive to State and shop or eat or just hang out.  We’d walk up and down the length of the main drag, popping into shops with interesting window displays or that might have the right accessory for a Halloween costume.  We watched the police ride by on their bicycles.  Am I wrong in remembering horseback-riding police?  I saw my first Mastiff on State Street.  It was a dark night and I stopped in my tracks when a pony walked by me on the sidewalk.  Except that pony was a Mastiff.  I think it was then that I fell in love with enormous dogs, the kind that outweigh me.

State Street also fed my intense love for live music and independent movies.  There were several theatres within a couple blocks of each other then (maybe still?).  The Arlington Theatre immediately became my favorite venue. I even saw Titanic (twice) at the Arlington.  A couple years apart, I saw Alanis Morissette and Fiona Apple play there on tours for their very first albums.  I made a friend while waiting in line for the Fiona Apple tickets on a very stormy ElNino day where, at the low points of intersections, the pooled rain water reached the tops of the wheel wells on my Jeep Grand Cherokee.  Through the power of Facebook, we’re still in touch, despite the fact that he lives in London now.

What’s so special about the Arlington is that it’s designed in the “mission revival style” and, even more so, that the interior walls are created like the facades of Spanish villas with twinkling stars on the high ceiling above.  It’s like seeing a musician (or a movie) outdoors in a beautiful Spanish-style town square.  I can hardly express how overjoyed I was to be there again for a concert a couple weeks ago.

This is where the ghosts come in.  Before the show, I had about 45 minutes to myself.  I walked to Still, owned by Sayward Rebhal’s partner, Jeremy Bohrer, who I’ve known for 6 or 7 years.  It’s a beautiful, precisely-curated shop where everything looks interesting and has a cool story.  (Jeremy and Sayward, I apologize for being too distracted by catching up and meeting Waits that I forgot to take photos and purchase something beautiful, as I meant.  Next time!)  While I was walking, the faintest hints of the ghosts appeared.  The ghosts of our younger selves.  Some of the storefronts are different now, but I could remember the feeling of walking down State Street, on that same trajectory, with Kelly and Amanda (she who passed away at 31).  I didn’t quite make it all the way to O’Malley’s where we went almost every weekend once we were over 21 (yes, I was always the designated driver).  So many stories from those nights at O’Malley’s!  I could hear our voices and our laughter, could feel the clothes we were wearing and the giddiness of whatever adventure we were on that night.  They brought tears to my eyes.  I didn’t expect that emotion to come up, but I’m grateful it did.  I’m grateful the connection runs so deep. 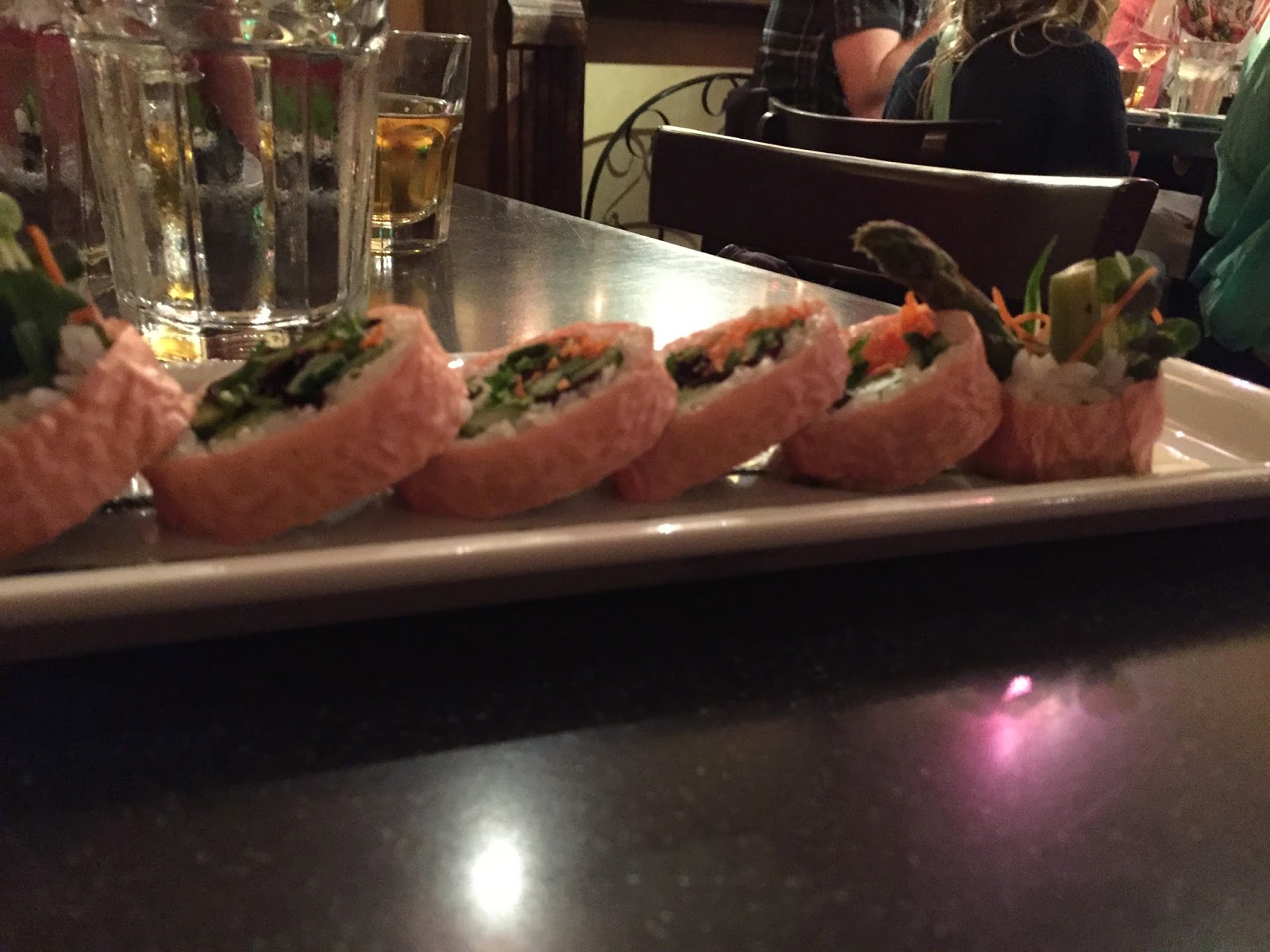 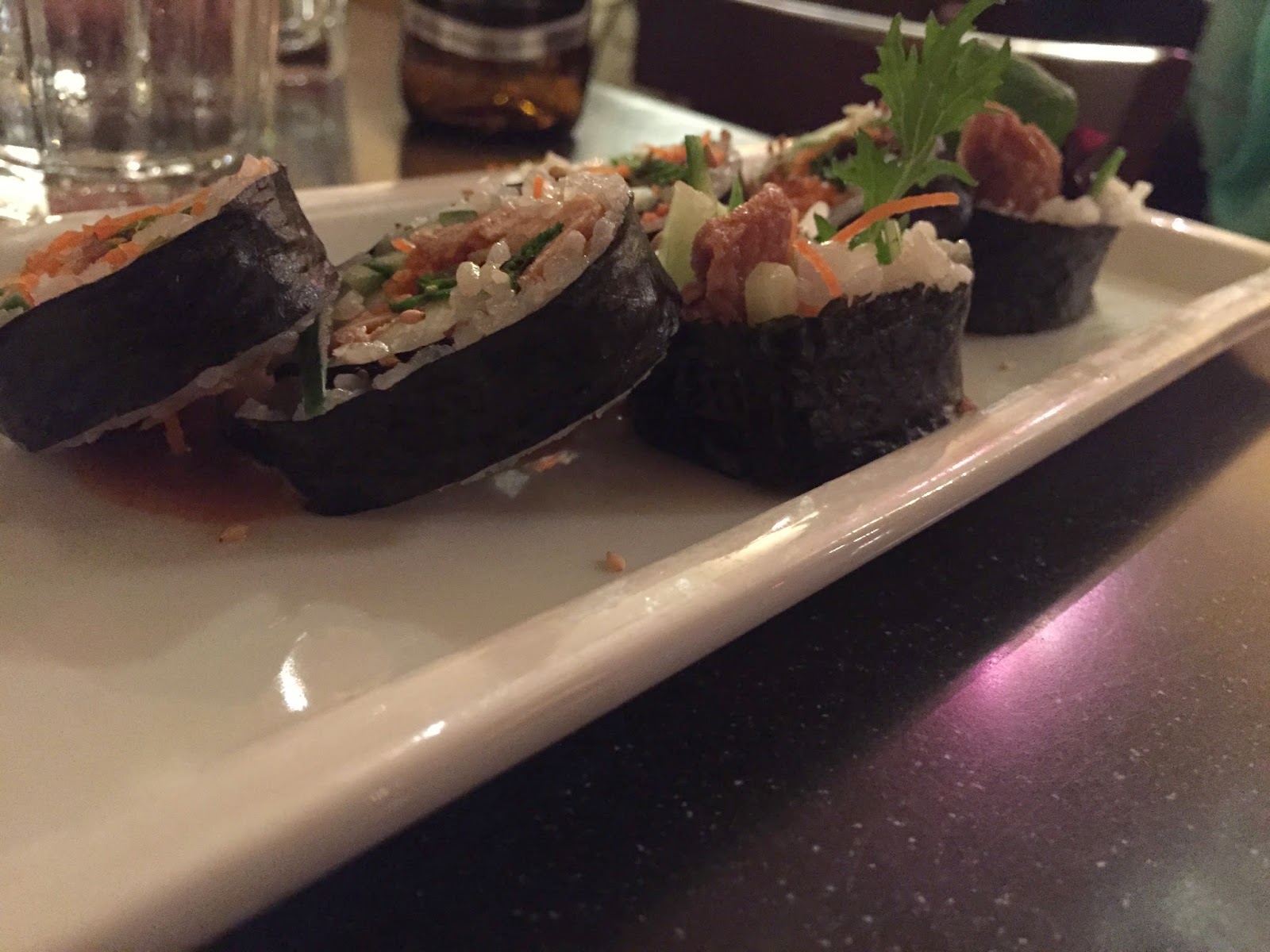 The ghosts disappeared for a couple hours as I searched for a vegan-friendly restaurant with the friend I met up with about 15 minutes after leaving Still.  This is a food blog, after all, so I have to share about the food!  After asking many questions, we ended up at Arigato Sushi, where I had a soy-wrapped Vegetable Roll and an inari-stuffed Zen Roll wrapped in nori.  I even mastered (ok, became capable at) using chopsticks!

Then we walked down the street to the Arlington.  I passed the spot where I sat on the terra cotta tiles outside the box office and made friends with the guy who lives in London now (and his then-girlfriend).  I soaked up the beauty of the architecture and the tile-work.  And then I walked into the theatre, looked around at the facades of the villas I hadn’t seen in too many years.   In the right aisle was where one of my friends let me sit on his shoulders during the Alanis show because everyone in front of us was standing and I couldn’t see.  Security made me get down.  We were on the left aisle for the concert two weeks ago and found our seats in the fifth row.  There were the spirits of our younger selves sitting second row center for Fiona Apple.  The now-Londoner, his then-girlfriend, Kelly, and I excitedly chatting about how close we were to the stage.  I had a pixie cut, a souvenir from my year in France.  The tears appeared again.  Sitting there in the fifth row with the spirit of my younger self looking on from the second row, I looked up at the same twinkling stars painted on the ceiling as she/I gazed at all those years ago.  I’m so grateful for ghosts.
Posted by Jenni (aka Vegyogini) at 12:42 AM 1 comment: