Vegan Dining at the Four Seasons

In the nick of time for holiday gatherings, the Four Seasons in Beverly Hills has created a diverse vegan menu exclusively for their Windows Lounge. I was privileged to attend an all-vegan tasting of the new menu items before Thanksgiving (all photos in this post were taken at the event and were provided to me by the Four Seasons as my photos were too dark). 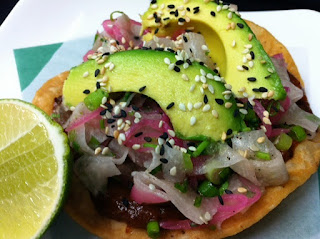 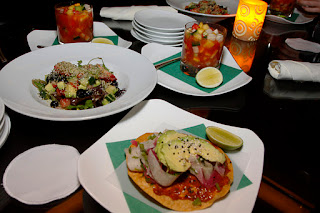 Real Fries: the best fries in the City, Chef Ashley’s house made ketchup $9 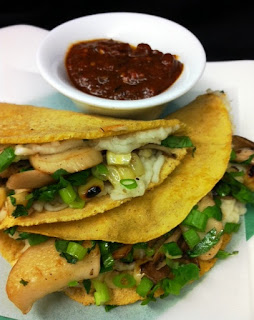 Vegan Chocolate Chip Cookies with Chocolate Mousse (I believe this was a special dessert created for the event only and isn't on the menu.)

Everything was delicious (although I did find the quesadilla a bit greasy) with my favorite dishes being the Morelian Gazpacho Salad and Eggplant Coconut Curry, which I would have served with rice rather than the too-delicate pappadums.

For vegans in LA, having an upscale, mainstream dining option where omnivores will also be happy is quite a coup. If the vegan menu were offered all day rather than only after 4 p.m., I'd most definitely suggest this for our annual office holiday lunch. It would also make a fantastic date location just as easily as it would work for a client or out-of-town family dinner.

I have a couple caveats, one of which is to make sure not to eat the snacks that are available on the bar and tables. Despite the fact that I attended an all-vegan tasting, there were non-vegan bar snacks arranged in dishes on our reserved tables during the cocktail portion of the evening. It was a very unfortunate oversight that was rectified by the removal of the snacks from the tables, but not until after people had partaken. The other is that the Young Hollywood Salad is exhorbitantly priced at $22! All the other menu items seem to have more reasonable prices, but do keep in mind that these are considered small plates akin to tapas and not entrees.

For more gorgeous photos, check out Veggywood's post about the same event.