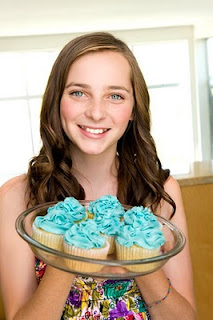 This past January, Follow Your Heart hosted an evening with a prix fixe menu created and prepared by none other than Tal Ronnen, author of The Conscious Cook. I went for the book-signing portion of the event and took a place in line behind a lovely 12-year-old and her equally lovely mother. We started chatting and, in that moment, Clara, her mom, and I became fast friends. Clara, now 13 years old and proprietress of her own baking company (look up Clara's Cakes on Facebook), has been one of my most admired people ever since. With that, I am proud and honored to interview Clara for the very first Hugger Food interview with a V.I.P. (Vegan Important Person).

1. You're very well-known in Los Angeles (and beyond!) for baking innovative vegan treats. Are you working on any new creations at the moment?

I don't know about well known...but, yes, I am working on some new creations. There are some you probably haven't heard of before (at least in a cupcake), like Orange Dreamsicle, Root Beer Float, and a couple more!

2. Those sound fantastic! Besides being an excellent baker, you're quite a skilled chef. What are your top 3 favorite savory recipes?

Why thank you, but my mother does most of the cooking, but I do enjoy cooking! I've been digging the Spanokopita recipe from Vegan With a Vengeance. I love cooking simple things, like ginger tofu and roasted potatoes. My mom makes amazing eggplant parmesan from her own recipe.

3. You have convinced some of your friends to adopt a vegan lifestyle. What has been your most effective tool for advocacy?

Taking them to vegan places or events. Places where there's support or restaurants that have amazing vegan food. Also, my blog helps. Probably the best tool is educating them in a passionate, but not preachy way.

4. There are many people who look up to you as an example of compassion and veganism. Who do you look up to as role models?

Where do I start? Well, of course you, since you were one of the very first vegans I met who motivated me. [Aww, thank you, Clara!] Casey Suchan and Denis Hennelly, they made the amazing movie Bold Native! When you talk to Casey she really pays attention to what you have to say, even if there are a million other people wanting to talk to her! Peter Young, for sure. I think all activists look up to him. Carol Glasser, she's such a smart activist. Shannon Keith, of course; (although, I didn't watch it) it must take a lot to make a film like Skin Trade and I'm so glad she did. Basically all vegans/activists I look up to since they're all so passionate and unique. Chef Chloe Coscarelli! She's so nice! Most importantly, my mother. She inspired me to become vegan and takes me everywhere!

5. Being a teenager is really tough, but you don't seem to be going through the typical teenager malaise. Do you think being vegan has played a part in your graceful transition into your teen years?

Thanks! It definitely has helped. Being a vegan keeps me busy and lets me meet a lot of people so I feel very loved, and I think that's a part of it. And I'm not eating all those hormones that would be in dairy [and other animal products]!

6. Recently, you've attended animal rights-themed film premieres, kicked off the Los Angeles VegWeek, and attended a circus protest. What are your plans for the rest of the summer?

Hanging with my friends, Animal Acres, going to San Francisco/Berkeley, hopefully this music festival that all of my favorite bands are playing, and baking of course!

7. Do you have any final thoughts to share with the Hugger Food readers?

Those of you in the L.A. area will have a chance to try Clara's cupcakes at the ARME Shopping Day benefit being held at the Beverly Garland Hotel, 4222 Vineland Avenue, North Hollywood on Sunday, July 25, from noon until 5 p.m. Vendors include Clara's Cakes, raw vegan cuisine, jewelry, clothing, and more.

New Yorkers will have an opportunity to see a screening of Bold Native this Monday, July 26, at 7 p.m. or 9:15 p.m. at Anthology Film Archives, 32 Second Avenue, NYC (details and tickets available here). The first screening will be hosted by Russell Simmons and the filmmakers (with special guests) will be present for both screenings.

A very special thank you to Melissa Schwartz for permission to use the gorgeous photo she took of Clara above!

UPDATE: With sincere apologies for not including the link to Clara's blog from the outset, you can find Clara in Veganland here. Enjoy!
Posted by Jenni (aka Vegyogini) at 9:40 PM 12 comments:

You Know You're Vegan When... 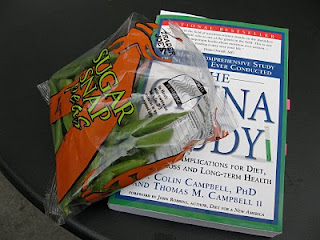 Also, please check the 4th of July Giveaway post for the winner!

Finally, Kristen's Raw is currently featuring a giveaway, too!
Posted by Jenni (aka Vegyogini) at 10:51 PM 6 comments: 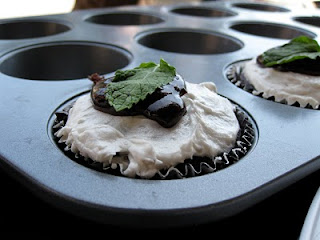 In honor of Los Angeles VegWeek, Assemblymembers Nava and Lieu, as well as Congressman Brad Sherman, have taken a vow of vegetarianism for the entire week! Thank you, gentlemen, for setting an excellent example! 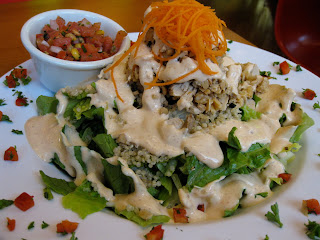 Other excellent events scheduled for Los Angeles VegWeek are:

Make sure to check the Los Angeles VegWeek website for updates and specials! 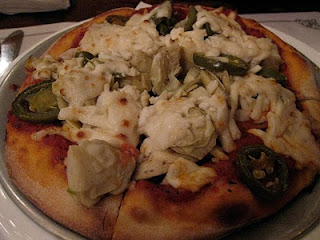 (Photo at top features Mint-Chocolate Cupcakes by Clara's Cakes; photo at center is my favorite Chop-Chop Salad from Veggie Grill; and photo at bottom is eggplant, artichoke, and jalapeno pizza with Follow Your Heart mozzarella from Pizza Cookery.)
Posted by Jenni (aka Vegyogini) at 10:43 AM 2 comments: 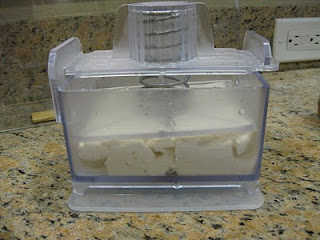 I'm one of those people who LOVES tofu. Have you ever seen the extra-firm, completely pressed plain tofu on the salad bar at Whole Foods (sometimes there's even an herbed version)? That is my favorite. I can eat plain cubes of that dense tofu in droves, but I've never achieved that density on my own. Enter the TofuXpress that the kind people behind the gadget sent me to review.

I wasn't really expecting results beyond what I've accomplished on my own with the traditional method of pressing tofu (wrap the block in two layers of paper towels, place it on a dish, put a second dish on top and weigh down the top plate with a 28-ounce can of tomatoes). I'd thought that Whole Foods-caliber of pressed tofu was beyond my reach. Still, I put a block of extra-firm tofu in the TofuXpress, stuck it in the fridge, and let it work its magic. After an overnight pressing, I poured off about 3 inches of liquid and stuck it back in the fridge because I wasn't ready to use it. Honestly, I don't recall how many more days it took me to go back to that block of tofu that was happily waiting for me in the TofuXpress. What I can tell you is that when I removed it from the fridge tonight, I was overjoyed to find that I had finally attained that Whole Foods pressed tofu density at home. This is a game-changer for me! 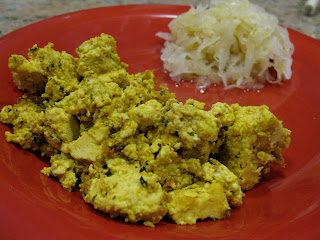 I did manage to restrain myself from simply eating this pressed tofu on its own, opting to make Bianca's Cheeze "Eggs" from the Vegan Crunk blog. Sadly, I didn't have celery salt in the pantry, but all the other ingredients in this tofu scramble worked together beautifully for a flavorful dish that I served with a side of organic sauerkraut (I can feel an allergy attack setting in and I wanted to load up on vitamin C). I very rarely eat tofu scramble, but when I do, I like it to be on the dry side and this was perfect due to the extra-dense TofuXpress tofu. It was so great to have a healthful, low-fat dinner that came together in about five minutes and made enough for tomorrow's lunch, too.
Posted by Jenni (aka Vegyogini) at 8:13 PM 4 comments:

UPDATE! The winner of the giveaway is lucky number 3, an anonymous commenter (who left a valid email address in the comments) wanting to try the lavender-scented candle. Congratulations and thank you to all who entered! 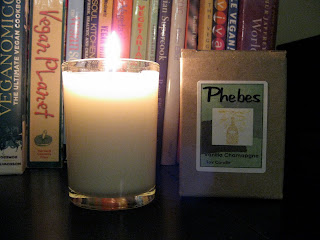 The kind people at Soy Candles by Phebes sent me a couple candles to sample and a giveaway for you! I received Vanilla Champagne and Lavender (shhh...don't tell that I was hoping for Chocolate Rain!), which smell lovely and burn very evenly. I'm thrilled with both scents and their pretty packaging; these would make excellent gifts to yourself and others. The candles are hand-crafted with plant-based essential oils and are made domestically in the US.

I'd love for you to win a candle from Phebes so you can experience them for yourself. Please go to their site and leave me a comment telling me which scent you'd like to try. Be sure to leave a valid e-mail address in your comment (I promise I will not publish comments with your e-mail addresses, but I must have an e-mail address to forward to Phebes). I will leave the contest open for one week. Good luck!

UPDATE: My apologies, but I received word from Phebes that they are unable to ship outside of the US for this giveaway. Also, Phebes is offering a special to my readers wherein if you order three candles, you will get a fourth free by simply mentioning "Vegyogini" at checkout.
Posted by Jenni (aka Vegyogini) at 5:35 PM 1 comment: