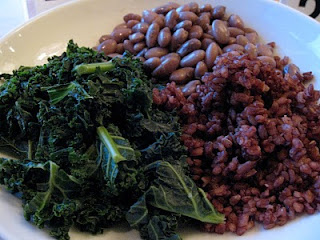 For some reason, this has been an extremely difficult post for me to write. Not difficult in the sense that I'm at a loss for words, but something has kept me from writing it way back in early February when I originally intended to do so.

Twice so far this year, I have embarked on month-long entirely whole foods "cleanses" (the second time, I took to calling it a "regime"). The parameters are pretty simple: I ate only vegetables, fruit, grains, legumes, nuts and seeds (in moderation), with a heavy emphasis on dark leafy greens. I did not eat anything processed (good-bye tofu) and I did not eat anything that included a sweetener of any kind (no sugar, maple syrup, agave nectar, brown rice syrup, etc.). It also goes without saying that I did not consume anything containing oil with the exception of a few times when I ate salads at Hugo's. 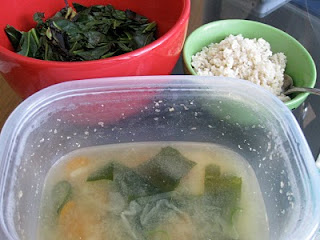 My first cleanse month spanned the entire month of January. My main goals were to eat really healthfully and to eat a mainly anti-inflammatory diet (www.nutritiondata.com has an inflammation factor listed for each food item). Having just read the book, I set out to follow many of the principles from Christina Pirello's Glow, including her daily breakfast plan of greens, grains, and wakame-laced miso soup. Knowing that I don't care for sea vegetables (it's the fishy taste that gets me), I decided to suck it up and stocked up on several varieties with the intention of making Pirello's recipes for miso soup and hot, nutrient-dense elixirs. I really thought I could do it, but that wakame was impossible for me to choke down after two days. Also, with my busy schedule, preparing her elixirs were just too time-consuming for me. So, I took some of the knowledge I'd gleaned from Glow and created a plan that worked for me and didn't compromise what I'd set out to achieve.

On work days, my breakfasts consisted of 1/4 cup of cooked quinoa or millet (cooked only in water), about 3/4 cup of steamed greens (usually Trader Joe's Southern Blend of mustard greens, turnip greens, collard greens, and spinach), and a serving of baby carrots. For me, it's an extremely satisfying meal that's easy on the digestive tract, full of nutrients, and comforting, as well. On weekends, I usually ate fruit or green smoothies for breakfast.

I always take my lunch to work and these usually consisted of big salads, the base of which was always 2/3 cup of thawed frozen corn, about 4 cups of dark greens (either the Southern Blend or spinach), about 3/4 cup of broccoli slaw, about 1/2 cup shredded carrot, and a drizzle of red wine vinegar as a dressing, topped with one teaspoon of ground flax and one teaspoon of hemp seeds (in the second month, I added one teaspoon of nutritional yeast, as well). Additions I made to these salads included shredded raw daikon, finely chopped cauliflower, and sugar snap peas. If I wanted a hot lunch, I would bring a plain baked sweet potato or dry roasted Brussels sprouts, or brown rice and beans and greens. I always follow lunch with a red grapefruit.

Dinner was a little more difficult for me to figure out. I'm usually on the run after work at least three nights of the week and often more, whether it be to a yoga class or another activity. I needed something I could eat on the run that would fuel me through yoga and keep me full, but not too full. At first, I was just eating a banana and I found that I was feeling really weak during class. I decided to eat 14 grams (1/2 serving) of raw almonds along with the banana. That gave me the protein boost I apparently needed to feel strong during class. I'd follow that up with an apple or some vegetables when I got home.

When I wasn't eating dinner on the run, I experimented a little and found that I really love steamed cabbage served over plain cooked quinoa and sprinkled with two teaspoons of hemp seeds. I'm pretty amazed that something so incredibly simple is so delicious, but when I think about it, I've always been just as happy with simple meals than with complex ones.

Another treat I found myself craving repeatedly was a sliced apple sprinkled with ground cinnamon and ground ginger. The two warming spices really take the apple to a new level!

The effects of the January cleanse were interesting. I had really even, consistent energy, without the highs and lows usually associated with eating (i.e. some people get sleepy after meals). My energy level stayed that way even when I hadn't gotten enough sleep the previous night. It was such a good feeling! That being said, I found myself being far more introverted that month than usual. I chalked it up to my body and mind detoxing. The only foods I missed were my daily breakfast Luna bar and tofu.

The second time around started March 22 and ended April 21 when I left for Jamaica for my brother's wedding. My food intake was essentially the same as it was in January, but I did not experience the introversion I mentioned. I think that could be because I made it a point to consume nutritional yeast, which is loaded with vitamin B12, something present in the Luna bars that I'm used to eating, but that isn't present in vegan whole foods. This is why knowing the nuances of one's one body is so important; I was able to remedy the introversion by simply fortifying my food intake with a little vitamin B12.

For me, eating whole, unprocessed, low-fat foods feels very healthy and feels like excellent fuel. I will obviously continue to indulge in treats occasionally (especially with my birthday being in a week), but I want to also continue eating a mostly whole foods regime. My body thrives on it and so does my mind. If you have any questions, please leave them in the comments and I'd be happy to answer.

[P.S. Unfortunately, I can't recommend Glow. While some of the information was interesting, it wasn't presented in an interesting or engaging way. Also, I felt that Pirello ignored the fact that sometimes ones food intake or genetics aren't the only factors of an ailment. For example, wrinkles can be caused by outside factors like spending too much time in the sun without sunscreen, but Pirello fails to recognize that. I feel that her information needs to be coupled with a significant amount of outside knowledge because it's incomplete on its own, so it shouldn't be used as your primary source of information.]
Posted by Jenni (aka Vegyogini) at 9:09 PM 7 comments: Yesterday was my soon-to-be sister-in-law's bridal shower and guests were asked to bring a potluck dish plus the recipe to compile a starter cookbook for her. I had three challenges as far as I could tell: to bring something that 1) I could eat on my all whole foods regime; 2) was something easy for a beginner cook; and 3) other people would eat. Since chili is usually a crowd-pleaser, I scoured a couple of my cookbooks for a really easy recipe that would not require me buying extra ingredients. Out of my pantry, I made the following recipe that I adapted from Alex Jamieson's The Great American Detox Diet:

Add all the ingredients to a 4-quart or larger saucepan over medium heat. Bring to a boil. Cover and reduce heat to low. Simmer for 20 minutes.