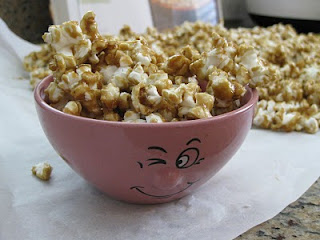 Some people have the Super Bowl; I have the Academy Awards. While I generally don't agree with the Academy, I still enjoy watching the telecast and I like to make something festive to eat during the show. Caramel Popcorn from The Joy of Vegan Baking seemed to fit the bill this year.

I have to admit that I'm not a fan of this cookbook, but there are a couple recipes within it that work, and this is one of them. Your Vegan Mom and I made this together once about a year and a half ago, so I knew what was involved and set aside a little over an hour to prepare it. And, in case you decide to make Caramel Popcorn yourself, let me take the guesswork out of it for you: 1/2 cup of un-popped popcorn equals 14 cups of popped popcorn (I used an air popper). I left out the optional peanuts, but you could leave them in for a Cracker Jack-like confection (Cracker Jack is vegan, by the way).

Since we're on the subject of cookbooks, I tested recipes for two great cookbooks that were just released and I will absolutely vouch for the delicious and creative recipes within: The Happy Herbivore by Lindsay Nixon and Vegan Diner by Julie Hasson. Also just released is the innovative and gourmet cookbook Veganize This! by Jenn Shagrin. All three would make wonderful additions to your cookbook library.
Posted by Jenni (aka Vegyogini) at 11:45 AM 4 comments: