Brian Patton, also known as "The Sexy Vegan," has been getting a lot of attention lately.  He's been featured on The Huffington Post and Compassion Over Killing's website, chosen as one of the Top 10 Books on vegan.com, reviewed on TreeHugger, and countless vegan blogs (recipes included in all these links).   There is also a fantastic Q&A wherein he names LA's own Madeleine Bistro's Red Beet Tartare as the sexiest thing he's ever eaten.

Brian's goal is to educate about veganism through one of the most accessible means possible:  Humor.  His brand of humor is pretty base, which is to be expected from the book's subtitle:  "Extraordinary Food from an Ordinary Dude."  Some of the recipes have ridiculous titles, like his signature dish My Balls (tempeh meatballs) and The Girlfriend's Favorite Salad That She Constantly Asks Me to Make and Won't Shut the Hell Up About, but many have run-of-the-mill titles like Minestrone.  There's something for everyone here, from breakfast dishes to sandwiches to traditional entrees to snacks like Jalapeno Poppers (I can't wait to try these) and alcoholic beverages for those of you who imbibe.  I'm impressed by the depth of this book that's only slightly masked by Brian's signature off-color jokes.

Another important aspect of this book is that it is full of QR Codes, those small black-and-white squares that you can scan with a smart phone if you have one.  Brian's QR Codes link the reader to a video demonstrating the corresponding recipe.  Cool, right?  His website is also full of recipe videos.

I have made two of Brian's dishes so far:  The above-pictured Sambar, a beautifully-spiced Indian-inspired stew, and The Almond Brothers Breakfast Bar, a homemade granola bar that I forgot to photograph.  Each recipe was quick to prepare and full of flavor.  I'm excited to continue cooking my way through this book and encourage you to do the same.

Brian is making an appearance at WorldFest this Sunday, May 20, if you will be in Los Angeles.  Their website describes WorldFest as "a solar-powered celebration of music, the environment, animals and humanity."  It's always a day of basking in the sun with friends (and family) while enjoying a huge variety of vegan food, listening to empowering speakers, seeing food demos by favorite vegan chefs and cookbook authors.  Please go and take your friends and family with you!

Dreena Burton's long-awaited new cookbook, Let Them Eat Vegan!, is now available in all its glory.  If you purchased the book between April 30 and May 6, she is even offering a fun contest for prizes!  Just use this link and follow the rules. 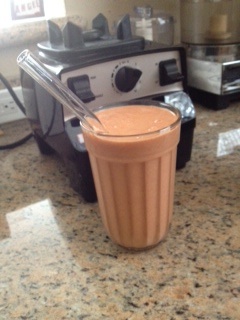 Since I was one of the lucky recipe testers for LTEV, I know first hand how wonderful the recipes are.  Check out my VeganMofo posts from November 2010 for tons of photos from my recipe testing for this book.  The above is a refreshing and nourishing Goji Strawberry Smoothie.  LTEV is full of healthy, whole foods recipes that are also delicious and creative.  There are no processed ingredients and many allergen-free recipes to suit all palates.  I've loved these recipes for nearly two years now and am so excited for you to be able to enjoy them, as well!
Posted by Jenni (aka Vegyogini) at 10:40 PM 1 comment: