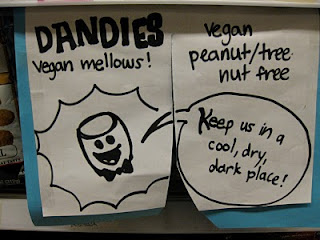 Spotted late this afternoon at my beloved Follow Your Heart, a joyous sign proclaiming the arrival of Dandies vegan marshmallows while simultaneously protecting them from exposure to light!
Posted by Jenni (aka Vegyogini) at 10:54 PM 3 comments:

This post has been a very long time coming. Way back in early May, my good friend from I Eat Vegan treated me to a birthday dinner at Fatty's & Co., a vegetarian restaurant in Eagle Rock (I can't help myself; I call it Fraggle Rock). I'd heard tales of Fatty's for quite some time, but the number one reason I wanted to go was their Vegan Chocolate Fondue. Quelle piece de resistance!

I was told that a birthday was cause for indulgence, so we proceeded to order three appetizers to share. 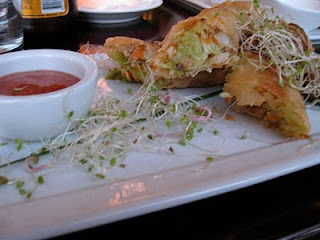 The Far East Spring Rolls (from the menu: veggie ginger chicken, cabbage and carrots served with mango sauce, mildly spicy). This was my least favorite Fatty's dish, as it was very greasy, but the mango sauce was good. 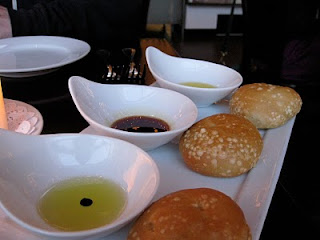 Next up was a dish simply called Oils. It was a trio of Italian white truffle oil, Austrian pumpkin seed oil, and Californian olive oil served with warm artisan bread. We all know that I'm not a fan of oil, but I made an exception for this special treat. Each oil had its own unique flavor, which made the tasting process very interesting. I believe my favorite was the deeply flavorful pumpkin seed oil. 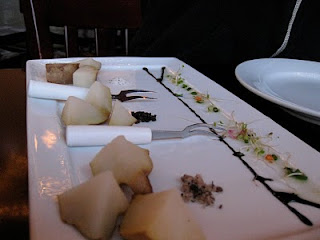 Our final appetizer was the Salts of the Earth with Special Roots (from the menu: hand harvested salts from around the world served with seasonal tubers, extra virgin olive oil and caramelized balsamic reduction). The salts were Italian white truffle, Danish smoked, and French herbed and the "special roots" were Jerusalem artichoke. Of all the appetizers I've had in my life, this definitely was a singular experience. Each salt had a presence that stood on its own, with the Danish smoked being the one I preferred.

Our entrees came with a choice of two sides, so we got one of each and shared. 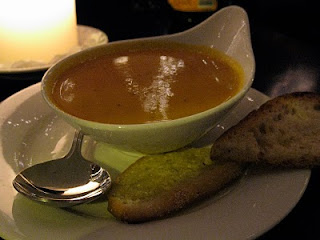 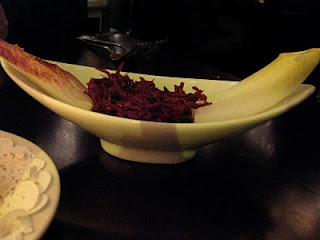 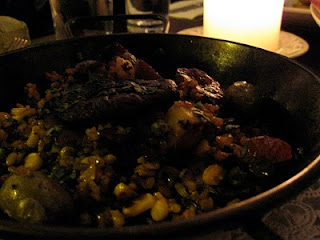 I ordered Paella for my main dish (from the menu: Trumpet, oyster mushrooms, and shiitake mushrooms, wild rice, corn, hearts of palm, heirloom tomatoes, olives, and sweet peas with saffron). It arrived in a cast iron pan and was very crispy! I enjoyed the varying textures and flavors of this dish. 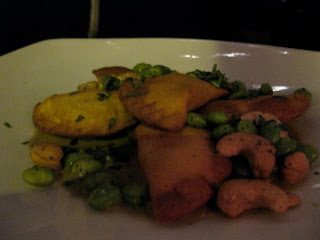 Mr. I Eat Vegan ordered a dish called Vegan Rissoles or a Cornfield in a Bowl (from the menu: hand cut corn raviolis, fried crisp with a mildly spicy fresh corn puree and tomato and chive relish).

For dessert, there was no question that we'd be sharing the Vegan Chocolate Fondue. 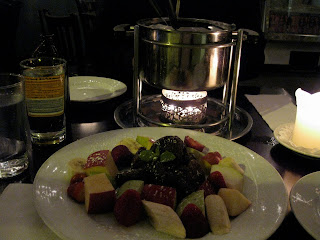 After this wonderful meal, I had set aside the thought of Fatty's as I only consider it a special occasion restaurant. However, months later, I read this Quarrygirl blog post that hinted at Madeleine Bistro taking over Fatty's (I recognized the photo in the post). I immediately e-mailed Mr. I Eat Vegan, asking him to refresh my memory about the flavors of oils and salts so that I could finally write this blog post before Fatty's was gone. In return, he suggested we go to Fatty's for one more pot of chocolate fondue. 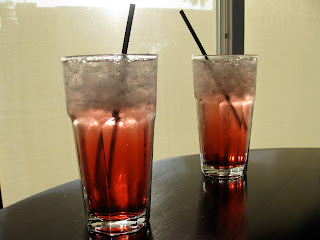 We decided to go all out and each ordered a flavored soda (they used to be called "rickies" on the menu). My lavender-vanilla is on the left and Mr. I Eat Vegan's lavender-pomegranate is on the right. They were too sweet for our taste, but fun to try. 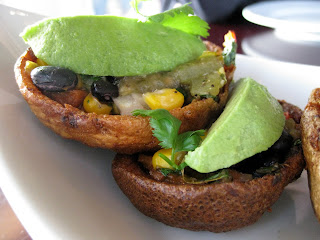 We shared the Vegan Potato Tacos (from the menu: Organic potato skins fried crisp and filled with corn, black beans, green chili, red bell peppers, onions, and tomatillo salsa). I removed the avocado from mine and then picked out the onions and these were good, albeit too greasy for my taste.

This was where things got tricky. We wanted to split a pizza with no cheese, but the server said that we were not allowed to do that. Apparently, the chef is so particular that s/he will not veganize anything on the menu except those items marked "vegan option." We asked two different servers and got the same response, which was that there used to be a vegan pizza on the menu, but the chef is reformulating the vegan cheese and would not allow veganized pizzas to leave the kitchen. We were pretty dumbfounded and horrified by this. No vegan pizza at a vegetarian restaurant? Instead, we decided we'd split down the middle the Paella and the Vegan Moussaca (from the menu: A mildly spicy gratin of chickpeas, red lentils, mushrooms, and onions between layers of roasted eggplant, garlic mashed potatoes and a tomato sauce Provencal).

Again, each entree came with a soup or salad. This time, we both opted for the Fresh Pea Soup since the salad option was the same beet and endive salad as the first time. Can you see that my pea soup was giving the peace fingers? 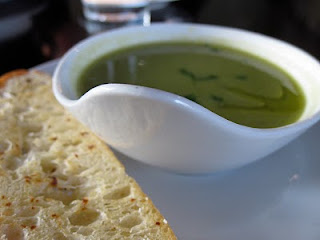 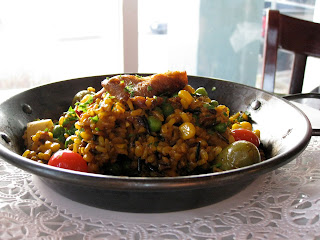 We had a window seat this time and I was able to get a much better shot of the Paella, which was just as good as the first time. 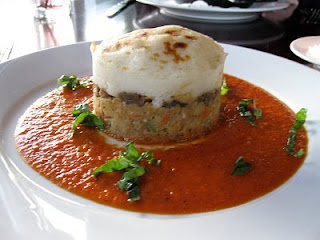 The Moussaca was my favorite savory menu item at Fatty's, hands down. It was light, with many flavors and textures, and a great tomato sauce. I really loved this. 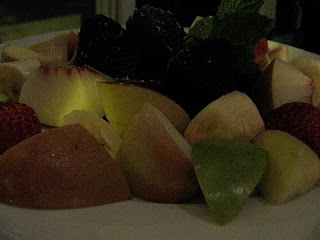 Of course, we ordered the fondue for dessert again! This time, the fruits were Fuji apples, Granny Smith apples, white peaches, strawberries, and bananas, along with the brownie squares.

Besides the pizza issue, there is another persnickety thing about Fatty's. The menu indicates that there is Vegan Cotton Candy available with a caveat: "Pure Vermont maple sugar spun to order [only if Miss Dingle is here because she is the only one who will do it.]. Well, Miss Dingle was there when we were! The table next to ours ordered it and were brought a cotton candy cloud about the size of a standard-issue basketball. I'm not exaggerating. When the customers vacated the table, having left a sizable amount of cotton candy in their stead, my adventurous dining companion got a crafty glint in his eye and asked if I wanted to try the cotton candy for myself. I protested, but next thing I knew, I had a gumball-sized portion of cotton candy in my hand. It tasted just like maple syrup and I'm glad I got to try it. 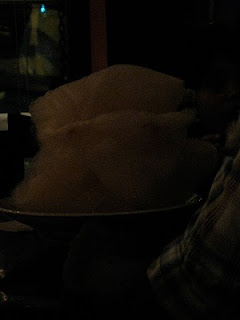 If you have a chance to dine at Fatty's, I'd highly recommend doing so as soon as you're able. You'll have a couple idiosyncrasies to navigate, but the food is good and diverse. If Madeleine Bistro does decide to take over, I hope they will include a chocolate fondue on the menu (and maybe create a vegan savory fondue or two, as well!).

Speaking of Madeleine Bistro, make sure to head over there right away before they close for "renovations and an expansion plan this fall." You won't regret it!
Posted by Jenni (aka Vegyogini) at 4:43 PM 8 comments: