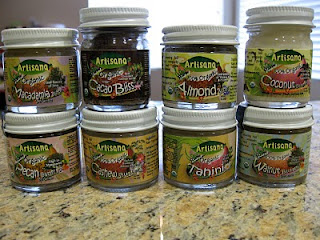 While I'm on this entirely whole foods regime, I'm going to try to bring you some reviews of products I tried before embarking on this journey. In mid-February, I got in touch with Artisana to ask if they would kindly send me samples so I could know first-hand why Chocolate-Covered Katie is always raving about them. The fine Artisana people were happy to send me this slew of teeny, tiny samples and I thank them so much for doing so!

Each of these adorable jars holds a mere one tablespoon of raw nut butter or coconut butter goodness. Whenever I have the pleasure of partaking in a spoonful of raw nut butter, I'm so surprised that anyone would want to add chemicals, sweeteners, and salt (I'm looking at you, conventional grocery store nut butters!) to something that is purely sweet and delicious on its own. Have you ever tried raw pecan butter? It's smooth, creamy, and sweet, with just the slightest hint of a bitter note, and is so delicious. Raw macadamia nut butter is creamy, sweet, and decadent. Walnut butter has that characteristic bitterness of the brain-shaped nuts. We make vegan sauces and cheeses with cashews because they have a very creamy quality, so raw cashew butter is very creamy and also a little sweet. Raw almond butter is also sweet and not too thick. I even ate the tahini straight up and found it delicious in its slightly bitter, unadulterated form. Artisana's nut butters taste pure and allow the flavor of the nuts to shine.

Coconut butter is an experience all of its own. I started eating it about a year ago when my aunt (she practices eastern medicine) gave my mom a jar of coconut paste. I stuck a spoon in it one day while I was at my mom's house and fell in love. That same jar is still over half full and I always make a beeline for it with a spoon whenever I visit. However, I didn't realize until trying the Artisana coconut butter that they were the same product with a different name. It's really just a nut butter made of coconut meat, so it's a spoonable, unsweetened paste that tastes like the inside of a young coconut. It gets a bit dry and crumbly in the jar after a while, but I really like when nut butters dry out and would happily do without that oil that pools at the top of the jar, so the dry and crumbly thing doesn't bother me at all.

Cacao Bliss is the aforementioned coconut butter mixed with deep, dark, raw cacao. It's not very sweet, but it is very rich and would satisfy any strong chocolate or sweets craving. In fact, Kristen Suzanne often takes along a tiny jar of Cacao Bliss to restaurants for her dessert. I think she has the right idea!

I have seen Artisana's nut butters at Whole Foods, which means they are accessible to most of us locally, and on Vegan Essentials, as well. They are a little pricey, but that is because they are using organic, raw, high quality ingredients. If you can fit them into your budget, they are absolutely worth the cost.

Looking at the Artisana website now, I see that I missed them at Natural Products Expo West. That is such a shame because I'm sure they were there with new products that I haven't tried yet! I'll look forward to seeing what they debut this year.
Posted by Jenni (aka Vegyogini) at 10:07 PM 5 comments: 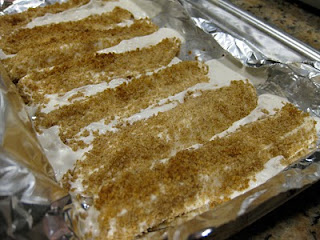 The nice people at Chicago Soy Dairy recently posed a challenge to vegan bloggers: they would send us a couple packages of Teese vegan cheese if we would come up with creative uses and then blog about them. I received my package about a week ago and came up with my first experiment immediately.

When I was a kid, my parents would take us to a 50s-style diner that served breaded mozzarella sticks with marinara sauce for dipping. As a picky child, that was one of the only items on the menu that I would order. As an adult, I wondered if Teese mozzarella would be able to replicate this childhood treat. Sadly, the Teese simply melted into a giant mess (thank goodness I lined the toaster oven baking sheet with foil first!), but it was fun to try.

Thank you to Dark Faerie for the inspiration to try this! She blogged about a similar experiment in 2008.

Thank you to Chicago Soy Dairy for the Teese and the challenge! I've embarked on an entirely whole foods regime for the next month, so expect my next experiment in May.
Posted by Jenni (aka Vegyogini) at 9:00 PM 9 comments: 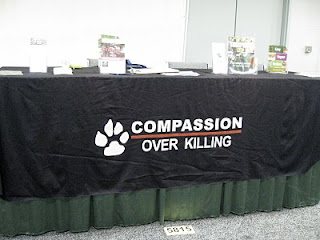 Last Saturday, I was very fortunate to attend Natural Product Expo West as a member of Compassion Over Killing. It's difficult to describe how fantastically magnificent this experience was for me. I'd say I was like a kid in a candy store, but it was far beyond that...perhaps I was like a kid at Willy Wonka's chocolate factory. Before I even set foot on the Expo floor, I was sampling tetra packs of O.N.E. coconut water and new sustainably-sourced water. Robert Cheeke, the vegan bodybuilder about to publish his first book, met me with my badge and a reusable bag already loaded with Vega goodies. 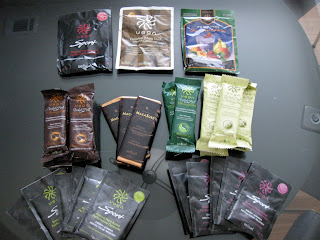 Finally walking onto the Expo floor, well, that was beyond what I could have imagined. Thank goodness I was armed with the reusable bag I'd brought and the Vega one that Robert gave me because I needed both! I don't even recall where I started, so I will just go by memory. 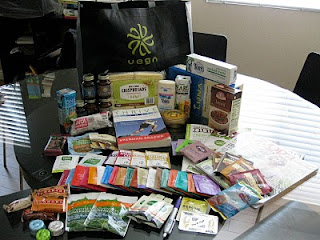 Turtle Mountain was there serving up cups of their So Delicious Coconut Milk Beverage, Coconut Milk Kefir (my first kefir ever!), Coconut Milk Yogurt, Purely Decadent ice cream, and one of the most exciting new products of the Expo, coconut water-based sorbet! Most sorbet has a sugar water base, so I'm very excited about sorbet that has the nourishing electrolytes and hydration power of coconut water. I tried the hibiscus (my favorite) and lemon flavors and they were delicious! I can't wait until they are available on the market.

The Nasoya booth was serving up a great tofu egg salad (I had mine on a spoon because the crackers weren't vegan) and chocolate pudding that showcased their Dark Chocolate Silken Style Creations.

Tofurky brought out the big guns with new frozen pizzas that feature Daiya cheese and vegan meats. The pepperoni was my favorite; so spicy and delicious! The other variety was vegetable and sausage, if I'm not mistaken, and was also quite good. They also had a new Smoky Maple Tempeh Bacon that was amazing! Absolutely keep an eye out at your local stores for these new products.

Lightlife was handing out vegan Smart Dogs with sauerkraut and your choice of condiments. That really hit the spot after I'd been walking around sampling products for a while!

Cool Cups make lunch box size vegan gelatin cups to satisfy your childhood nostalgia. I tried the Peach Mango flavor and it was tasty! These are also re-packaged with Trader Joe's branding at your local Trader Joe's stores. Look for them in the refrigerated aisle.

Also for your lunch box, Eco-Planet was at the Expo with their organic vegan pretzel and cheddar crackers, which I buy if I know I'll be spending time with my nieces and nephews. More exciting than their yummy crackers, though, they now have incredible hot cereal (I tried Maple & Brown Sugar) and toaster pastries (think vegan pop tarts)!

There were many vegan samples of Chocolove to try, including Raspberries in Dark Chocolate.

I was overwhelmed with the massive varieties of tea from Yogi, Stash, and Eden. Check out all the tea bags in the photo of the samples I brought home, not to mention the individual bags of Teechino!

My favorite boxed chocolates company, Sjaaks, had a booth with samples of their Chocolate Mint Bites, Chocolate Peanut Butter Bites, and Chocolate Almond Butter Bites. Their newest piece of excitement is vegan chocolate-covered marshmallows (Dandies, I believe) that were so good!

I finally got to try the fabulously tart goldenberries at the Navitas booth. 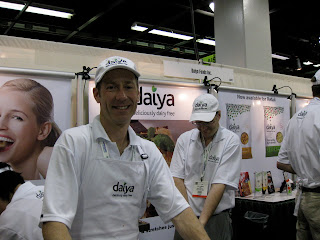 Daiya, which I now know is pronounced "day-uh," was downstairs, serving up delicious grilled cheese sandwiches and pizzas. Their big news is that they now have cool retail packaging. 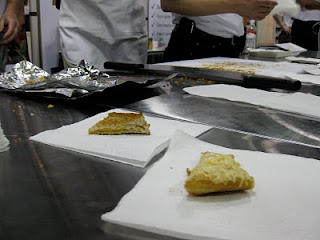 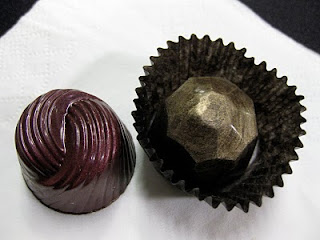 Xan Confections chocolates, which are perfection, gave me a sample of two of their vegan flavors: a Strawberry Saintly Sin and a Coconut Pecan Caramel Jewel. These are so amazing! They're sold at select large Whole Foods Markets, so buy some if you see them. Only the Jewel, Saintly Sins, and some of the turtles are vegan, though, so be sure to ask.

I take Vitamineral Green daily, so I was thrilled to visit the Health Force Nutritionals booth. They were distributing samples of their products Vitamineral Green, Earth, ZeoForce, and Warrior Food, all of which I'm eager to try in smoothies or on their own.

Along with all the incredible Vega samples, Brendan Brazier, the amazing vegan triathlete, autographed a copy of his book Thrive Fitness for me. I'm excited to read it!

Follow Your Heart, one of my favorite places on earth, had a booth where they showcased their delicious vegan salad dressings, barbecue sauces, cheesecake, and more! Their big news is a reduced-fat version of Vegenaise (pronounced "vej-eh-nayze"). I had a lovely chat with the brother-in-law of the co-owner and two of my favorite servers were there, too! One of them was kind enough to give me a hot sample of BBQ Chicken-free Chicken and it was so good.

Living Harvest's Tempt hemp milk products were hard to resist, so I sampled the Mint Chip and Chocolate Fudge ice creams and a couple flavors of hemp milk.

I saw and sampled so much more (leave a comment if you have questions about something I didn't highlight) and missed so much, as well. For example, I sadly missed most of the raw food booths, the VegNews booth, and the VBites booth (check out the Quarrygirl post for some of what I missed). Next year, I definitely want to go for at least two full days so I can see everything!
Posted by Jenni (aka Vegyogini) at 4:51 PM 12 comments: 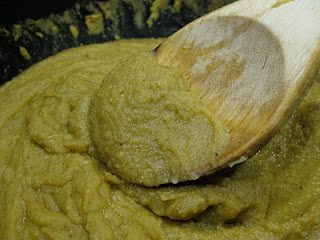 I was especially freezing cold in the office today and all I could think about was making an Indian-spiced soup to bring for lunch tomorrow. When I got home, the first book I pulled off the shelf was Dreena Burton's Eat, Drink, & Be Vegan, immediately hitting the index in search of soups containing red lentils. I landed on the Lemon Chickpea Lentil Soup, which I'd made once before nearly 2 years ago (sometimes it takes a while to repeat a recipe since I'm only cooking for one).

Dreena blogged about this recipe here, but I made some changes based on my tastes and what ingredients I had on hand. I cut the recipe in half because I only had 1/2 cup of red lentils; omitted the oil; used 4 small garlic cloves; substituted about 2 cups of broccoli slaw in place of the onions, celery, and zucchini/tomato; used one can of chickpeas (drained and rinsed); and pureed the entire soup in my high-speed blender rather than using an immersion blender. My soup is thick and smooth and it's perfect! Nicely spiced with a slight tang from the lemon and I know it'll be perfect for another cold day at the office tomorrow.

If you're not already familiar with Dreena's cookbooks, I highly recommend them (she's provided sample recipes here). She uses healthful ingredients that are easy to find and the results are always wonderful.
Posted by Jenni (aka Vegyogini) at 9:05 PM 9 comments: