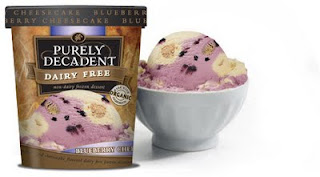 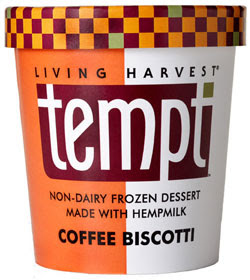 Now that my sweet tooth has been satisfied, it's back to my big, beautiful salads...
Posted by Jenni (aka Vegyogini) at 8:46 PM

thank you thank you for that link to the brown bread ice cream, that's unbelievable with the grape nuts and everything - I'm making it right away! (ice cream maker or not, I'm going to try!)

(too bad about the blueberries, though - as a blueberry fanatic I guess I'll avoid the little dried things in there :P)

Too bad about the blueberry disappointment! But of course homemade trumps store-bought--that brown bread ice cream does sound amazing! :)

Hmmm, surprised to hear you didn't like the blueberry cheesecake flavor. I actually think it's pretty good. Perhaps you got a bad batch? Although I do prefer all of the Purely Decadent coconut milk flavors to the soy overall. They are very rich and creamy, and the mocha almond fudge flavor is especially divine!

I haven't tried the hemp ice cream yet, but I think I'll steer clear of the coffee biscotti flavor when I do. And thank you so much for the link to the brown bread ice cream recipe. I can't wait to try it!

yay! i'm so glad you liked the brown bread ice cream. thanks for the review!

i really liked the tempt ice cream, but i didn't mind the biscotti chunks being soft. i tried their mint chip flavor as well and it wasn't as creamy but still good.

Sorry about the blueberry badness...a drag indeed, but I think the brown bread ice cream will make up for it. J'espère que tout va bien pour toi! Bisous!

I can't believe I haven't yet tried either of these ice creams you reviewed! Still haven't yet found Tempt though... I've heard such good things about it, so I'm dying to see it for myself.

I don't know why this is amuses me, but the captcha word verification reads "truckfu" below. Excellent.