One of the items on my to-do list this weekend was choosing a new RSS reader since Google Reader will be permanently disabled as of July 1.  Quick research revealed this article and I chose Feedly.  The best part of Feedly that I've noticed so far is that I simply logged on with my Google account info and all of my subscriptions showed up; I didn't have to transfer my subscriptions one-by-one as I'd feared.  I'm seeing one downside, which is that the reader is an app and I doubt I'll be able to download the app on my work computer.  [ETA:  I had no trouble with Feedly at work.]  Otherwise, I'm very happy with Feedly's features and layout. 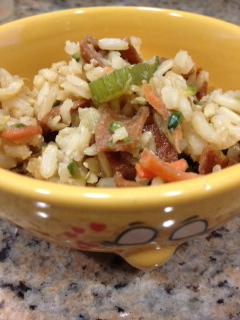 Do any of you remember Veggie Life magazine?  It was a vegetarian quarterly that ceased publication many years ago, which leads me to believe it's acceptable to publish this Hawaiian Fried Rice recipe from the Summer 2002 issue.  I used to make this recipe very often, but I haven't made it in years.  It's the only recipe I tore out when I donated all of my back issues.

1.  In a large skillet or wok over high heat, stir-fry mushrooms, celery, carrot, and onion in oil (or vegetable broth) until tender, about 3 minutes.
2.  Add veggie ham and stir-fry 1 minute.  Add green onions, soy sauce, and seasoning.  Stir-fry until hot, about 4 minutes.  [My note:  Fold in the rice until thoroughly combined.]

1.  In a dutch oven or wok over medium heat, stir-fry celery, carrot, and zucchini until tender, about 5 minutes.
2.  Meanwhile, in a separate non-stick skillet over medium heat, cook the vegan ham until slightly crispy.
3.  Add the rice to the veggies and stir to combine.  Then, add the soy sauce and broth powder and stir, making sure the seasonings are evenly distributed.  Finally, add the vegan ham and stir once more to combine.  Heat through and serve.

Funny thing is, I'm reading this right now in the new reader I'm trying out, to replace Google! I'm using The Old Reader and so far I love it. Very scaled down and simple, and it's not an app... check it out at: http://theoldreader.com

this looks delish! I keep hoping Google will come to their senses before July 1 and keep Reader around...

Ugh, I'm dreading the big Google Reader meltdown and am still sort of pretending like it won't happen... I'll probably jump ship over to Feedly soon too, though.

Mmm, Hawaiian fried rice! Sounds like comfort food to me, and brings back happy memories of my time on the islands. :)

I can't believe how easy it was to switch from Reader to Feedly.

The Hawaiian fried rice looks awesome! It's my kind of food. :-)