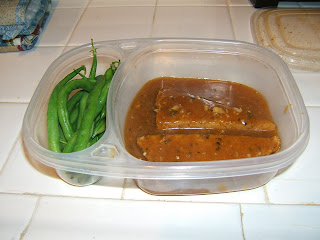 Last weekend, I made the Hot Sauce-Glazed Tempeh from Veganomicon along with some steamed green beans. It became my lunch for 4 out of 5 days last week and it was something I looked forward to eating every day. Instead of wine, I used 3 tablespoons of red wine vinegar plus enough water to make 1/2 cup of liquid. I used 3 cloves of garlic instead of 2 and I dumped in a bunch more hot sauce than called for because I wanted to finish the bottle I had. I ended up marinating the tempeh for approximately 8 hours. I cut it into 8 thin triangles instead of 4 thicker ones because I wanted to make sure that the marinade really permeated the tempeh. The recipe gives different options for cooking the tempeh and I chose the broiling option, which worked out wonderfully. Once the tempeh was cooked, I took the remaining marinade and whatever liquid was left over from the broiling, added about 1 tablespoon of cornstarch and heated it over a medium-high flame in a saucepan until thickened. That made for a wonderful sauce that I literally scraped out of my containers with a spoon after I finished the tempeh each day. ;)
Posted by Jenni (aka Vegyogini) at 9:04 PM

I'd simply add extra hot sauce to make it spicier, but I like your logic! I have only had tempeh once, it was flax flavored, and I didn't enjoy it very much. I do think I need to find some plain and try it again though, I hear such rave reviews about it, so either the stuff I had truly was gross or I'm crazy. :-)

These were really tasty when I made them, but I wished I had cut the slabs thinner to absorb more marinade, so you absolutely called that correct! They look kind of like Salisbury 'steak' with all that gravy, mmmmmmmm!

i need to give tempeh more of a chance. i just love tofu so much. the sauce sounds great!

This is a recipe I've wanted to try for forever... It must have been amazing, if you were excited to eat it for four days of one week!! Tempeh is so magical. I was reading a book for pleasure the other day, and one of the characters make a crack about how disgusting tempeh is... And I was like, what?!? Are you crazy?!

Looks like a tasty lunch to me! Oh I love tempeh....

What a yummy-looking lunch. And I love the cute little lunch container too.