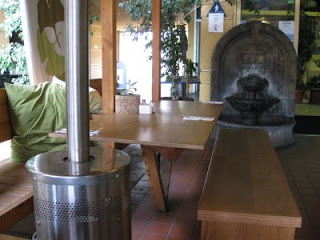 Last November, Sante La Brea was given a major overhaul on Kitchen Nightmares (you can watch the full episode through this link or here). Even more recently, Sante La Brea has a new chef as of this past January. I don't know whether said chef wants to be mentioned by name, so his name is Chef for purposes of this post.

Chef has been busily creating new recipes to feature on Sante La Brea's menu. He invited Foodeater to come out for lunch three Saturdays ago at a time when he could spend a little time talking to her about his approach and philosophy and, luckily for me, she invited me to join in the fun! Thank you again, Foodeater; I was so happy to get to share this experience with you! 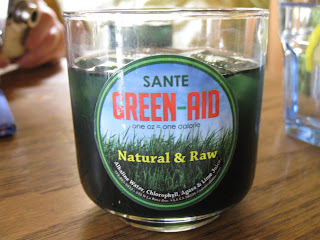 While we perused the menu, Chef brought us each a Green-Aid, which was loaded with antioxidants and oxygenating properties. It was also delicious and I was sad to see the bottom of my glass. 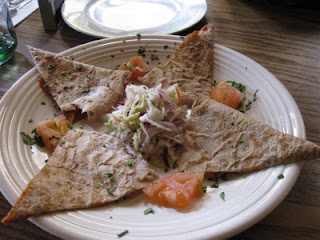 We decided to share the Pizzadilla for our appetizer (from the menu: Tomato, basil, marinara, & soy cheese, folded into a whole wheat chapati), substituting vegan cheese for the casein-containing soy cheese. It arrived at the table garnished with a light cabbage salad (very good) and fresh tomatoes. The Pizzadilla itself had a creamy interior from the vegan cheese, which is more of a cheese sauce, that combined nicely with the marinara. I would order this again (but not until after I've tried the Baked Samosa version of this dish). 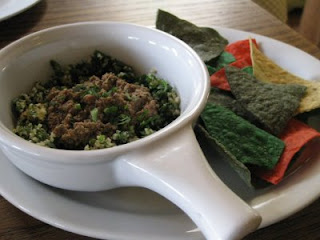 Chef also wanted us to try his vegan pate, the description of which I sadly failed to photograph from the menu (my apologies), but that I remember had a base of mushrooms and walnuts. It's usually served with Ezekiel bread, although he brought us multi-colored tortilla chips. I found the pate mild-flavored and pleasant; a very nice way to begin a meal. 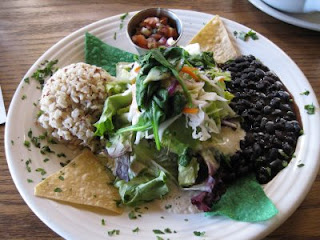 I ordered Enchiladas for my entree (from the menu: Two yellow corn tortillas stuffed with garlic spinach and topped with creamy tofu spinach sauce and melted soy cheese. Served with black beans, red quinoa brown rice, and mixed greens tossed in a cilantro lime dressing). These enchiladas were surprisingly light. The filling really was just spinach, which was refreshing, so it was more like eating a big plate of veggies. In fact, you can't even see the enchiladas under that beautiful fresh salad! The beans were perfectly seasoned, while the brown rice that was flecked with red quinoa was plain. I was really pleased with this choice. 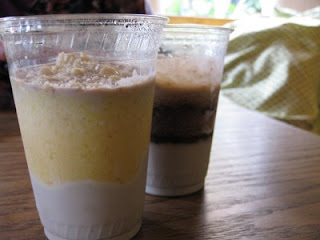 Stuffed to the gills from the meal, I didn't think I had room for anything else. However, Chef gifted us with two of the parfaits he's been experimenting with and we couldn't refuse. The one on the left was Caramel Apple and the one on the right was Buttered Almond. My preference was for the Buttered Almond this time around (there was a second time that I'll get to a little later). The base for both parfaits was the same: a creamy layer of blended cashews, banana, and agave. While the Buttered Almond had a middle layer of a chocolaty spelt sponge and was topped with an almond butter layer, but Caramel Apple's middle was filled with applesauce and apricot glaze and topped with more of the base cream. 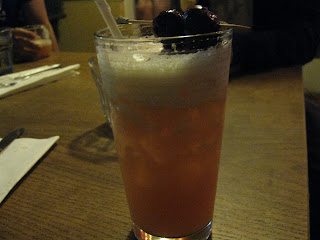 Fast forward to two Saturdays ago when I attended a Vegan Drinks gathering at Sante La Brea. Chef gifted me with two virgin cocktails (the alcoholic counterparts were made with Soju (Japanese vodka)). Above is Tiger, a melon cranberry iced tea. Below is Sex on the Beach, which is pineapple, cranberry, and melon. Both were delicious. I also sampled a friend's non-virgin Mon Cheri with peach Schnapps and cherry liqueur. It was strong, but had a nice cherry flavor. 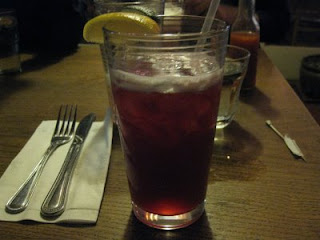 As the night wound down and only a handful of us remained, Chef brought out a new parfait flavor. This one was my favorite; chocolate peanut butter banana. I'll spare you the extremely dark photo of the delicious dessert. Just trust me that it was wonderful.

The times, they are a-changin' at Sante La Brea, and I'm very curious about what's going to come next for Chef and the growing chef staff.
Posted by Jenni (aka Vegyogini) at 8:58 PM

Sounds fabulous--and boy, were you guys pampered! Nice chef (and sounds like he can cook, too) ;)

We should have stayed longer, but my day had already been a pretty intense one after being at the expo all morning. I didn't know how much more I could handle large crowds of people.
I'm thinking I may sneak attack you at work Friday ;)

that food all looks amazing!! i am dying to try the pizza-dilla.

i had some parfaits too when i went, and they were out of this world. i really wanna try the chocolate banana...