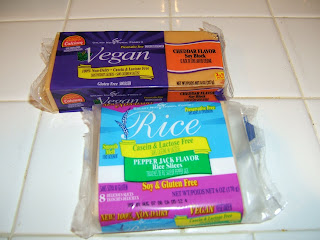 The cool people over at Galaxy Foods noticed that I was feeling left out and offered to send me some of their vegan goods to sample and review! Thanks, Galaxy Foods! So, this lucky vegan blogger received a cooler box containing a block of vegan soy cheddar cheese and a package of vegan rice pepper jack cheese slices. They even said they're going to send me hummus in May! I haven't had a chance to try the cheddar yet, but I ate a slice of the pepper jack as soon as the package arrived a week or so ago. The texture is reminiscent of the American cheese slices of many people's youth, but the flavor is really good. I really enjoyed this spicy, creamy cheese.

Tonight, after a long and exhausting week, I came home and made a quesadilla with the pepper jack slices (they didn't really melt) between two brown rice tortillas from Trader Joe's (I love these tortillas, even if they don't heat very well; hence the curling edges). The photo is crummy, but this dinner really hit the spot! My mom used to make us quesadillas on the nights she didn't feel like cooking, so this was pure comfort food for me. 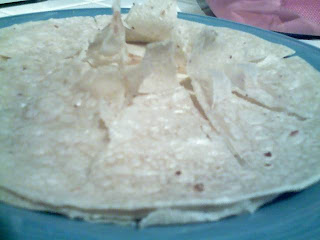 I so miss eating quesadillas :(

you have to bake the galaxy! its amazing with a lot of other ingredients!!!!

check out my vegan goulash recipe....

Is that pepperjack in slices? I've never seen that version yet!

haha that was so the same way with my mom! until I began to love quesadillas so much that I asked for them all the time. I think that's why I have such a thing for them now. Def. comfort food!

i really miss quesadillas and pizza. it seems that nobody has quite gotten the melting cheese down yet. let me know if you hear of any more substitutes. awesome on the samples!!!! you lucky thing! :) i am gonna try out galaxy at some point.i really love their fake parmesan. they have that nailed as far as i'm concerned.

ok, ok, I’ll retract my “no chili dogs in my apt. statement”. I’ve never actually had a vegan chili dog though.

Huh, I didn't realize they made those varieties- Sound like it's worth further investigation!

I'm surprised and happy to know that quesadillas are comfort food for others, too! I will definitely try to bake the Galaxy...thanks for the tip, Food Trance!