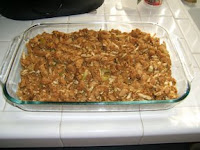 3 or 4 years ago, I attended a vegetarian Thanksgiving cooking class offered by Whole Foods with local chefs Del 'n' Coluch. Every year since, I've made the Toasty Tasty Stuffing for my Thanksgiving meal. I do change some things in the recipe, but I'm not totally sure of the etiquette for putting up someone else's recipe (i.e. how many changes do you need to make for it to be ok), so I'll keep it to myself for now. I'll say that the recipe includes soft tofu and toasted almond and walnuts, so there's plenty of protein to be found just in the stuffing. That's my way of telling you that I don't usually make a separate protein for my meal. :) Whole Foods sells bags of bread cubes (or rectangles) around this time of year, so I just buy a bag of those to make life easier. Otherwise, this recipe involves celery and garlic (I sub more celery for the shallots) and seasonings. It's a recipe that's easy to make, reheats well, and tastes great! 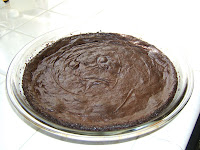 I'm sure I'm not the only one out there who made Eat, Drink, & Be Vegan's Chocolate Pumpkin Pie this year. I bought an Arrowhead Mills Chocolate Pie Crust, but thought it'd be nice to bake the pie in a Pyrex pie plate instead of in the foil pie plate that was the crust's packaging. So, I put my hand on the inside of the crust and turned it upside down, thinking it'd come out whole on my hand and I could slip it into the Pyrex. No such luck. Most of the crust ended up in my sink. Oops! Thinking back to this FatFree Vegan Kitchen pie, I decided to make my Chocolate Pumpkin Pie crustless. After I took the photo, I realized that I could make crumbs out of the remaining crust and sprinkle it over the top of the pie. The pie is fantastic without the crust, so disaster averted! If I make this again, I'll make it crustless on purpose. I used Sunspire Grain-Sweetened Chocolate Chips, which is my favorite vegan chocolate chip. The pie came out richly chocolatey and nicely spiced from the organic pumpkin pie mix I used. I've never liked pumpkin pie, but I liked this one, so there may be hope for me to like regular pumpkin pie yet!
Posted by Jenni (aka Vegyogini) at 5:56 PM

Great save on the pie!! I too made the chocolate-pumpkin pie from ED&BV, but you KNOW what I replaced the chocolate with, right??? ;0)

Haha VeggieGirl, I totally thought of you making this w/ carob, which I also love. What did you use for the crust, though?

ChocolateCoveredVegan: It's so good!

Yum! I heard that if you change at least 3 things in someone else's recipe it becomes yours. I have talked to a couple vegan chefs and published authors and they say go for it and share, just mention where the original came from. If you are comfortable with this I would love to have your recipe for the stuffing. If not, can you email it to me? My email addy is on my blog.

That's what I figured, VeggieGirl! ;) Next time, try it crustless...it's so good.

will do!! although I must admit - the graham cracker crust was quite a delicious component to the pie :0)

Glad you posted that stuffing recipe, sounds delicious!
That crustless pie sounds perfect. I need to make that one soon....