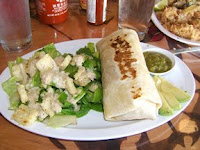 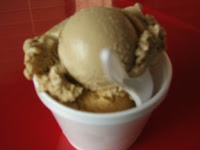 Today involved several "firsts." Your Vegan Mom, her adorable and energetic son, and I met Foodeater in person for the first time! We had so much fun talking about anything and everything that came to mind over food at Pure Luck in Los Angeles on N. Heliotrope. The others had sampled Pure Luck's cuisine before, but it was my first time. I had the burrito with jackfruit "carnitas," which was accompanied by a caesar salad. As you know, I'm picky, so I got the avocado on the side to share with Your Vegan Mom's little guy, no onions on anything, and the salsa verde on the side. Now, I don't recall ever having eaten carnitas as an onmi, but let me tell you that jackfruit does an amazing impression of meat (from what I can recall). Wow, I think you could fool the most die-hard meat-eater with this stuff. They should start pre-packaging jackfruit to sell at Whole Foods in the tofu, tempeh, and seitan section. The burrito was fantastic and I dipped my bites in the salsa verde, which was perfect. The caesar was so good. I really enjoyed this meal. Of course, I had to save half of my burrito so I'd have room to get vegan ice cream across the street at Scoops!

By the way, the server at Pure Luck was so friendly and accommodating. It was obvious that she recognized my lunch companions from their previous visits and she had a lot of fun running around after the little guy. When she came out to let me know that they had accidentally put the salsa on the burrito instead of leaving it on the side, she was totally cool about it when I opted to have them make a new one (I'm sorry I'm so picky!).

Back to the food...It was also my first time going to Scoops, an ice cream parlor that features four vegan flavors daily. The four vegan flavors of the day were: cookies & cream, pumpkin spice, coffee (& Jim Beam, I think), and strawberry jasmine. They happily allowed me to try each and every vegan flavor before deciding. :) When you order a scoop, you actually get two, so I got the pumpkin and coffee in a cup. The coffee was really good and the texture was spot-on. I couldn't taste the Jim Beam, which is good because I don't like alcohol. The pumpkin tasted fantastic, but the texture was a bit course and icy.

On our trip to Scoops, the little guy had a first, too...his first ice cream cone! You should have seen the zest with which he ate this ice cream. What an incredible joy it is to watch kids discover things for the first time.

Oh, and another first...it was my first time photographing food at a restaurant!
Posted by Jenni (aka Vegyogini) at 5:57 PM

I am so proud, your pictures came out great! It was so great to meet you... fine food and fine company, what more could one ask for? Next time I promise not to complain about dumb boys the whole time :)

Wow, Great pictures and I really need to try both of these places! I've heard so much about both, but somehow just haven't made it there yet...

Yay for you no longer being a restaurant-picture-taking virgin :o).

Next time you go to Scoops, invite me! (Too bad I live so far away...)

Thanks, Foodeater! Without you there to let me know it was ok, I might never have had the courage!

Textual: They're definitely worth it! You should give them a try as soon as you have a chance.

ChocolateCovered: You're always invited! I figure it's time for you to pay L.A. a visit anyway.