Today is my 10th anniversary of vegetarianism (and the first anniversary of this blog) and I think this post is a good way to celebrate amazing vegan food.

What did I do with my pound of seitan, you ask? I cooked an Iranian feast! I've carried great memories of delicious home-cooked Iranian food with me since I used to dine chez ma meilleure amie in high school. It was high time I tried my hand at it!

A while ago, I bought A Taste of Persia, a cookbook written by Najmieh Batmanglij. I really wanted to make chelow (rice) with tah dig (the golden rice crust). All I had left was to decide what the main dish would be. I chose khoresh-e bademjan (eggplant khoresh). According to the book, khoresh is a delicately braised dish (there are so many different kinds of khoresh that it was hard to choose!).

When the seitan had been baking for about an hour and a half (see previous post), I started the rice. Making chelow is a laborious process! I won't give away Batmanglij's recipe, but it included rinsing the rice multiple times, boiling it, creating the tah dig layer, cooking it again, and finally steaming! What you see below is the chelow with tah dig after I turned it out onto a baking sheet (I don't have a platter). It cracked, but still tastes great! It's wonderfully buttery (despite not containing any butter substitute; I just used canola oil) and carries the amazing fragrance of saffron. 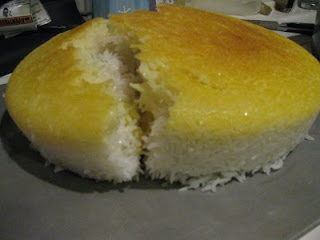 I changed several things about the khoresh-e bademjan recipe. It called for onions, which I replaced with fennel, I significantly reduced the amount of oil, instead of an egg wash for the eggplant, I whipped up an Ener-G egg, and instead of meat...I substituted a pound of the seitan I blogged about in yesterday's post!

The fennel, tomato, and seitan mixture are combined on the stovetop and the eggplant is fried separately. Then, they all come together in a casserole dish to bake in the oven for about 45 minutes. The result is a deliciously warm, comforting, tangy dish with eggplant that simply melts in your mouth. Khoresh-e bademjan is going to become a staple of my fall and winter cooking. I've promised to try my hand at other types of khoresh, too, though!

Khoresh-e bademjan straight out of the oven: 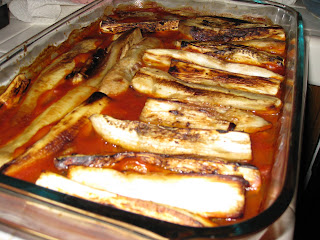 My lunches for this week and part of next look like this: 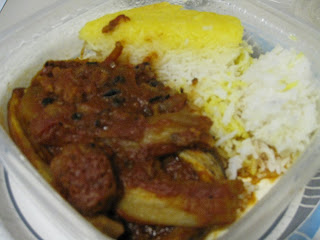 This meal took me a little over 3 hours to prepare (not including the time it took to make the seitan). While it's not something I have the time or inclination to do every day, it was a wonderful way for me to spend a rainy day in the kitchen.

*Nush-e jan is the equivalent of bon appetit!

10 years... how wonderful! Think of all the animals you've NOT eaten in that time :)

This feast sounds awesome too! I absolutely love Persian style rice, and yours looks like it came out just right. Bon appetit... and here's to another 10 years of cruelty-free indulgences!

Sounds like a great time! I love cooking and could do it all day. Glad you have a wonderful dish of memories. By the way, Happy anniversary!

When I first saw the picture of the chelow I thought it was some kind of coconut dessert! What a beautiful dish!
Happy anniversary!!

Happy anniversaries! I've always wanted to try to make the rice with tah dig. I looks so delicious. Congratulations on such a successful meal!

Bon anniversaire! Woo hoo! I love Persain food so so much. I would have loved to been at your house to enjoy such a feast!

Wow! This all looks wonderful! And happy anniversary!