This summer, I rediscovered Hugo's Restaurant in Studio City (there is also a West Hollywood location, but the Studio City outlet is more convenient to me). While Hugo's offers omnivorous fare, it has a multitude of vegan and vegan-optional items that are clearly marked. Hugo's is also raw vegan-friendly and gluten-free-friendly and has a large selection of amazing teas.

I've been exploring the menu, trying different things, and decided to share my culinary adventures with you so far. 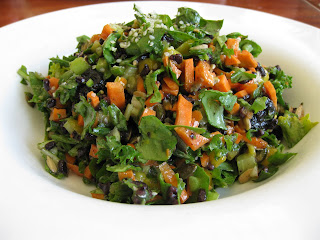 On my first time back at Hugo's after a long absence, I ordered the Hippie Hemp Salad, a special that month. From what I remember, it contained a completely raw mix of chopped leafy greens, carrot, celery, mango, sprouted mung beans, dried cherries, and hemp, sunflower and pumpkin seeds, all in a hemp dressing. Hugo's, if you're reading this, please make this salad a regular menu item! It was fantastic. 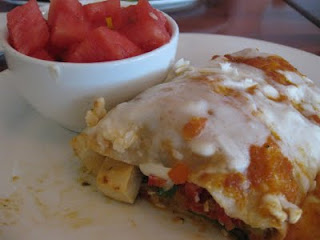 This is the El Desayuno Burrito de la Casa, veganized with tofu and Follow Your Heart cheese (from the menu: Eggs scrambled with sauteed tomatoes, peppers, onions and cilantro. Topped with roasted tomato chipotle sauce and mozzarella cheese melted on top. Garnished with guacamole.). I had fresh fruit on the side and requested no onion and no guacamole. Hugo's does an amazing job with tofu; it's firm and I love that it's cubed instead of scrambled.

I also had a taste of my dining companion's Yellow Squash and Spinach Puree with Roasted Corn soup that was the vegan soup of the day (the photo was not pretty). I didn't really care for it, but it did give me the idea to attempt something similar at home. 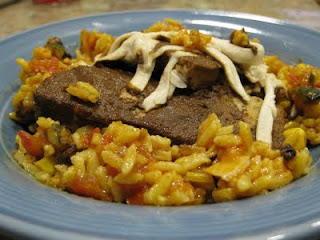 I ordered this amazing Tofu Mole (from the menu: A stack of two crispy corn tortillas, chicken breast medallions or tofu steak and a Oaxacan-influenced mole sauce made with chiles, nuts, seeds and chocolate. Covered with melted mozzarella cheese. Served on a bed of diced zucchini, corn and rice.), veganized by omitting the crispy corn tortillas (they are fried in the same oil as calamari at the restaurant), and opting for tofu and Follow Your Heart cheese. The mole sauce is beautifully spiced and the tofu's texture is perfect. This meal instantly went on my "must order again" list. Along with my dinner, I had an iced Organic Red Peach Keemun tea. (The photo is of my leftovers because I was eating with people who don't know about my blog.) 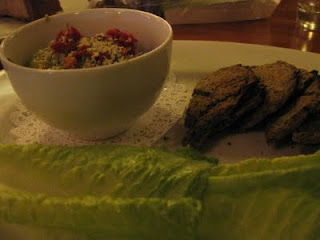 Most recently, I went to dinner with my mom because she hadn't explored Hugo's vast selection of gluten-free dishes yet (for those of you who are newer readers, she has Crohn's Disease and Celiac Disease. I started with the Green Juice Blend (from the menu: Banana-Orange-Liquid Chlorophyll-Rice Bran Syrup-Hemp Oil.), shocking even myself, as I tend to have a "don't drink my calories" self-rule and there was clearly oil in the juice, which we all know I omit from every recipe I make. Nonetheless, I happily drank it down, forgetting to take a photograph in the process.

I really wanted to try the September Green Bean Hummus appetizer special (from the menu: A puree of green beans, leafy greens, hemp seeds, roasted garlic, lemon juice and spices. Served with grilled sprouted mung bean cakes and hearts of romaine.). The hummus itself was good, very garlicky and lacked a specific green bean flavor, but those sprouted mung bean cakes were incredible! They had a slightly bread-like consistency and a mild flavor that is difficult to describe. I love that they were grilled and, though not raw, had a bit of that raw, dehydrated quality. 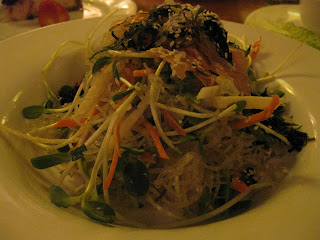 For my entree (about 90% of which came home with me for leftovers), I bravely ordered the Kelp Noodle Salad Bowl (from the menu: Kelp noodles are mild flavored, fat-free, gluten-free, and very low in carbohydrates and calories. Served with julienne vegetables, sprouts, snow peas, cilantro and scallions. Tossed with a mango-sesame dressing. Garnished with mixed sea vegetables, pickled ginger and toasted sesame seeds.) sans scallions. I say bravely because I never got used to things tasting like the sea, but I was able to use the pickled ginger to mask the flavor of the mixed sea vegetables. In the end, I really enjoyed this dish and would order it again. 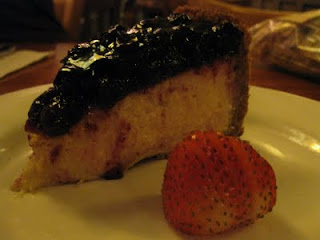 My mom ordered the Best Vegan New York Style Blueberry Cheesecake (from the menu: An incredibly smooth blend of white sweet potato, cashews, organic agave and lemon zest. Filled high inside a crust made of coconut, nuts and spices. Topped with agave sweetened blueberries.). I took a bite and found the crust delicious, but too chewy. The filling was more like a pudding or custard than a cheesecake and fairly bland. That being said, though, I've never been a fan of cheesecake and have never tasted New York Cheesecake (vegan or pre-vegan).

Hugo's has consistently pleased the vegans, vegetarians, and omnivores in my life and has quickly catapulted to the top of my list of places to dine out. I can't wait to try something new next time I'm there!

WOW! This is some seriously delicious looking food. That cheesecake especially!

How awesome that they will veganize a non vegan menu item! All restaurants should do that. The burrito looks so good and over-stuffed! *LOVE*