Did you know there's a vegetarian cooking show on public television? Until I received a review copy of Totally Vegetarian by Toni Fiore from DaCapo Press, I had no idea. If you're interested, check here to see if it airs on a local station in your area.

While Fiore makes a strong argument for veganism via a brief discussion of factory farming, this is most definitely a vegetarian cookbook, as many recipes contain dairy and some contain eggs. I was disappointed that she didn't use that discussion as a way to segue into a vegan cookbook, but the book is called Totally Vegetarian and not Totally Vegan, and that is what the reader should expect.

The first 45 pages are a guide to vegetarian ingredients, kitchen tools, and tips, which gear the book toward novice vegetarian cooks more than another audience. For the novice vegetarian cook, this book will prove extremely valuable. However, a novice cook period might have some trouble following the recipes, which can be inconsistent. My biggest issue (other than the few typos I found; I'm an editor by nature, what can I say?) was that Fiore would list amounts of the same ingredient differently in different recipes. For example, a recipe for one dish would call for an 8-oz. jicama and a recipe for another dish would call for a medium jicama. It would be more useful to either choose to identify an ingredient by its weight or by its approximate size. To employ both methods could create confusion. Other recipes would call for canned tomatoes, but would not indicate the size can called for and, considering that canned tomatoes generally come in either 14.5 or 28 oz. cans, that could lead to a disastrous dish. That's why I believe that an intuitive cook who is simply new to vegetarian cooking would most benefit from Totally Vegetarian.

The best part of the introduction pages is the following: "Vegetarian cooking isn't about what you don't or can't eat, but about the amazing choices, interesting preparations, and downright delicious dishes that you can eat." This is not only an inspirational statement, but a ready answer for new vegetarians when asked the question "But what DO you eat?" 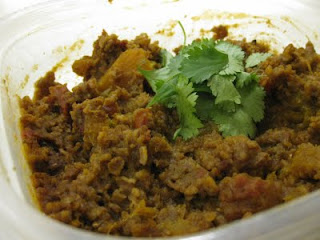 Since it's cold and rainy in Los Angeles and since I was very excited to have a reason to buy one of those adorable sugar pumpkins, I chose the Pumpkin-Bulgur Chili (recipe excerpted below). I made substitutions to suit my taste, but I think this would have been successful as written if you're looking for a mild chili recipe. I completely omitted the oil and onion and increased the garlic to three cloves. The recipe calls for quite a lot of curry powder and I know that my curry powder is a little too sweet (it's heavy on cinnamon) for that much to have tasted good, so I used 1.5 tablespoons of cumin instead (chili just needs cumin anyway, in my opinion) and cut back to only 1 teaspoon of curry powder. I used one 14.5 oz. can of diced fire-roasted tomatoes with jalapeno (including the liquid) instead of the fresh tomatoes called for and did not squeeze the liquid out of the bulgur (a step I felt was unnecessary).

I was very impressed with the use of bulgur as a substitute for the meaty texture. Fiore could have easily called for TVP, but went for a whole grain as opposed to a soy ingredient. I also loved the use of roasted pumpkin, which adds an amazing texture, flavor, and nutritional value (although I would have added an instruction about the size she wanted the pumpkin chunks to be). All in all, the chili was the perfect lunch on a cold, rainy day. Also, being made from a whole grain and vegetables, with the omission of the oil, this is a McDougall-friendly dish. 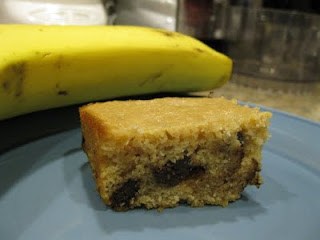 I had two brown bananas sitting in my fruit bowl, so the Banana-Chocolate Chip Cake was a must-make. I opted for whole wheat pastry flour over all-purpose and omitted the oil in favor of an equal amount of unsweetened applesauce. Apart from that, my only modifications were to sift the flour, baking powder, and salt and to add the sugar with the wet ingredients instead of with the dry (it's well-known in the baking world that sugar is considered a "wet" ingredient because of the way it reacts in baking). The cake turned out moist with just a faint hint of banana (I might add more banana next time) and, although I might suggest adding a bit of nutmeg or a bit of cinnamon to the batter, it's very good as is.

Pumpkin-Bulgur Chili [my modifications in brackets]

This autumnal chili was created by Didi Emmons for the third season of my television show. Didi never ceases to inspire and surprise me with her healthy, creative combinations of vegetables. The best part about her recipes is that every dish tastes so darn good. For this far-from-traditional chili, the pumpkin is roasted to bring out its sweetness. Chewy, fiber-rich bulgur mimics the texture of ground meat and the dish is finished off with protein-packed toasted pumpkin seeds. Aromatic and comforting, this is a meal, according to Didi, that both she and her cat, Henry, thoroughly enjoy.

1. Preheat the oven to 375*F. Cut the pumpkin in half with a large knife, such as a cleaver. Scoop the seeds out with a large spoon. Place the pumpkin cut side down on a foil-lined baking sheet and bake until the flesh is soft, 50 to 60 minutes. Spoon out the flesh and set aside. [I did this the night before. After the pumpkin had cooled, I cut it into bite-sized chunks.]

2. Meanwhile, in a medium bowl, combine the bulgur and 2 cups warm water [I used boiling water]. Let stand for 15 to 30 minutes.

3. In a large, heavy-bottomed saucepan or stockpot, heat the oil over medium heat. Add the onion, garlic, chile powder, curry powder, [cumin, in my case], and cinnamon. Cook, stirring frequently, for about 5 minutes, or until the onion is soft [I omitted the onion, so I let the garlic and spices toast until fragrant].

4. Drain the bulgur, then scoop it into your hands and squeeze out the excess water [I didn't squeeze out the excess water, but if you choose to, please wear heat-resistant gloves or wait until the bulgur is cool to the touch]. Add to the pot along with the tomatoes and 2 cups water. Bring to a simmer. Add the pumpkin flesh and cook for about 20 minutes [I cooked at a simmer], adding more water if necessary, 1/4 cup at a time, to attain a chili-like consistency. Just before serving, add the pumpkin seeds [I omitted] and cilantro [If you like cilantro, make sure to include it, as it adds a freshness and brightness to the chili.]. Season with salt and pepper and serve.

I love your blog and always find myself reading it, great job :)

That show doesn't air in this area - nothing good ever happens here! BOO!

Anyway, the Banana-Chocolate Chip Cake looks so good, and I like the changes you made to the recipe.

Pumpkin bulgur chili just sounds fantastic, and I'm always looking for ways to use up the surplus of bulgur in my pantry. Thanks for sharing the recipe!