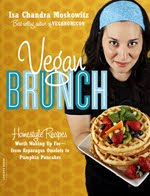 Vegan Brunch took over the world when it was published this past May. I received a review copy from DaCapo Press (thank you, DaCapo!) and, while I read the cookbook cover-to-cover immediately, I just started cooking from it.

Isa Chandra Moskowitz, who brought us Vegan with a Vengeance, Vegan Cupcakes Take Over the World, and Veganomicon, has written a comprehensive cookbook , veganizing classic brunch fare like omelets and coffee cake and putting exciting new spins on everything from waffles (sweet and savory) to sausages. I was very excited that she included a recipe for vegan pain au chocolat, but was disappointed to find that she substituted phyllo dough for the classic croissant (fortunately, I have a good friend who has promised she'd make me vegan pain au chocolat at some point in the future and I'm quite patient). That, however, has been the only disappointment so far. This is a book that showcases Isa's sense of humor, her knack for giving excellent tips, and it's also full of gorgeous food photos (as an aside, I believe this book would make a great gift). 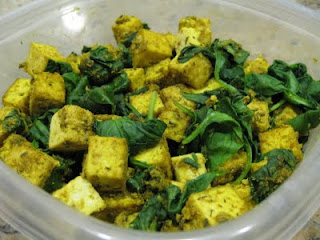 I had plans to cook up a nice brunch-for-dinner this past weekend, but on Thursday night, was faced with not having anything to take for lunch the next day. That called for perusing VB in search of a recipe that only called for ingredients I had on hand. I settled on making a half recipe of the Basic Scrambled Tofu with the spinach option. Preferring the texture of cubed extra-firm tofu, I went that route, dry-frying my tofu in a non-stick skillet and omitting the oil. I really liked the spice mixture method, but I would adjust the spices a little for my own taste next time, reducing the turmeric and increasing the cumin. I would probably also increase the nutritional yeast or maybe just sprinkle a little on top when serving. A little hot sauce would've been nice, too. The spinach was the perfect addition and I doubled it because I love spinach. This made a great lunch, keeping me well-nourished until dinner time. 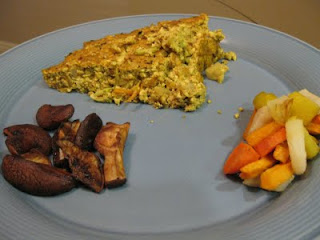 Of course, I did make myself a nice Sunday night brunch-for-dinner (with plenty of leftovers for lunch this week). I try to eat vegetable-heavy meals as often as possible, so I chose the Curried Cauliflower Frittata, Roasted Root Vegetables, and Smoky Shiitakes (I omitted the oil from all three recipes).

The frittata hides two cups of delicious and nutritious cauliflower and a grated carrot (I substituted broccoli slaw because that was what I had) among the tofu ad seasonings. There is a nice punch of spicy heat from the curry powder (my Trader Joe's curry powder is heavier on the cinnamon than I'd prefer, but I didn't taste it once the frittata was cooked) and a bit of smokiness from the cumin.

Whole Foods was out of parsnips today, so my roasted vegetables were golden beets, turnips (I wanted rutabaga, but they were huge and I only needed 1/2 lb.), carrots, and sweet potatoes. Roasted vegetables are so incredibly flavorful and these were no exception. I ate tons of them straight off the baking sheet while waiting for the frittata to finish in the oven.

The shiitakes were an excellent way to get the smokiness of bacon in the form of a vegetable. As a bonus, they would be great to serve when you have a soy-intolerant guest who couldn't partake in tempeh or tofu bacon.

At some point, I will delve into the sweeter side of VB, but I was very happy with the savory recipes I made. Brunch-for-dinner was a success!

(Image of the VB cover borrowed from the DaCapo Press website.)

VB is slowly replacing VWAV as my favorite Isa book. You tried recipes I haven't yet, making me even MORE excited. i love breakfast. for dinner.

I've reviewed the amazing Vegan Brunch on my blog several times, the only recipe book I have ever done, actually. I love it! I think the tofu omelets are my favorite....then the gingerbread waffles...

Yu, the scrambled tofu looks amazing! I am going to look for the book!

I love doing Isa's recipes sans oil, they are the best!

Excellent menu selection. I want to eat all of that!