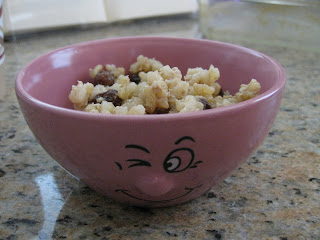 Last week, I checked out The McDougall Program Twelve Days to Dynamic Health from the library. The information within is very interesting and I'm enjoying learning his thoughts on nutrition and health. You can learn more about Dr. McDougall's program on his website. One thing to note about this book in particular, though, is that many recipes contain honey, which, if you abstain as I do, can be substituted with agave nectar or maple syrup. Also, I saw at least one recipe that called for Emes gelatin, a gelatin that once purported to be vegan and was proven years ago to not be vegan. I don't know if vegan gelatin would make an adequate substitute or if recipes calling for that ingredient should simply be avoided.

Saturday night, I went to a fabulous vegan potluck where I knew there would be McDougall followers. I was compelled to make a McDougall-friendly dish, so I went through all the recipes in this book and decided on Rice Pudding. As long as you have cooked and cooled brown rice on hand, this is a really easy recipe. I made three substitutions: maple syrup instead of the honey called for, almond extract because I was shockingly out of vanilla (I used half the amount of almond extract because it's much stronger than vanilla), and fat-free soy milk instead of low-fat. The pudding was so good!

Many of you have asked about the little bowls you've seen in my posts here, here, and above. I bought them a little over three years ago in Paris at Monoprix, which is a French chain of stores that are basically grocery stores and inexpensive department stores in one. I couldn't resist getting this set of four adorable little bowls and was so nervous that I wouldn't be able to get them back to L.A. without breaking, but I did it! While I wish I had more information to offer, they are not marked with a brand. I'm so glad you like them as much as I do!

I've never had rice pudding before but it sounds so good!

That was my first experience with Rice Pudding! I'm forever a fan! Thank you so much for thinking of us!

I love that McDougall book. I have never looked at the sweet recipes so I didn't realize that he used honey. The rice pudding looks delicious.

I love rice pudding, but could definitely stand to have a healthy version of it!

I noticed your bowls because my sister got me a couple of mugs like them years ago. I have no idea where she got them though...

Rice pudding is one of my very favorite comfort foods! And I also think those bowls are adorable. ;)

I love Monoprix!!! When I lived in France I definitely found myself there practically every day. It's like a fancier version of Target. Of course that's where your adorable bowls would come from! That rice pudding looks awesome too :)

i really want those bowls!! those are so cute! DAMN, and i was just in paris! :)