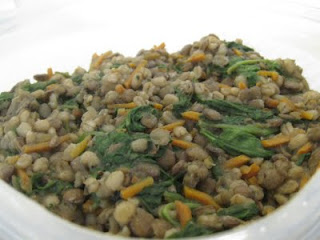 There is only one cookbook in my collection whose pages literally fall out every time I open it. Long before the proliferation of amazing vegan cookbooks hit the shelves of major bookstores, I bought Foods That Cause You to Lose Weight by Dr. Neal Barnard. I was visiting my dad in New York City that holiday season in 1998, having just finished reading Diet for a New America on the plane ride there. We stopped at the Barnes & Noble in Union Square, one of my favorite parts of the city because my dad used to live in Gramercy Park. I had been vegetarian for close to three months at that point and was just about to attempt veganism. My vegan cookbook shelf consisted of Cooking with PETA and nothing else (look how far I've come; the library list at right doesn't even cover all the vegan cookbooks I have!), but I was ready to expand the collection. Dr. Barnard's book was the perfect choice because it was full of easy recipes made up of easy-to-find ingredients. Over the next year, I wore the cookbook out, learning to cook and expanding my palate. While I don't often need such basic recipes anymore, I still turn to it for easy, comforting meals.

Case in point was a night a couple weeks ago when, after eating a huge salad for lunch daily for months, I really felt like I needed soup for the next day's lunch. I found the Lentil Barley Soup recipe in this cookbook and halved it to make just enough for lunch (at 70 calories per serving, half the recipe was the right amount of calories for lunch). As I don't eat onions and I didn't have any celery in the fridge, I added a couple handfuls of delicious spinach. The ingredients absorbed all the liquid to make for more of a stew than a soup, but this was the perfect warming, spicy lunch that I had been craving.

I think I have that book but haven't read it- I will look for it now. thanks for sharing.

That looks so hearty and delicious! I need to get that cookbook, great recommendation.

Love lentil soup...and with barley omg! I will need to look for that recipe as well.

The soup/stew looks perfect for a warming lunch. I don't have the book, but it sounds like a must-get!